Humanism is a tradition of values that emphasizes the importance of human dignity, virtue, capabilities, and concerns. It does not directly consider the question of the existence of God, but rather the morality and ethics of human conduct; for humanists, the morality of the individual’s conduct remains a crucial consideration whether or not a god exists, hence there are both theist andatheist humanists. Of the ethics which underlay humanist philosophy, rationality is strongly emphasized: those who follow this philosophy strive to base all of their convictions, religious or secular, on sound evidence and reasoning.

The birth of humanism can be traced as far back as 1000 BCE to the Lokayata philosophy of India. Around the sixth century BCE, Taoist teacher Laozi imported this philosophy to China, where Confucius was also teachings ethics which centered on human conduct. In the Pali texts of the Buddhist tradition, Gautama Buddha showed skepticism about the supernatural world, arguing that it is absurd to believe that human existence is permanent if neither a soul nor anything associated with it exists.

Also in the sixth century BCE, humanistic philosophy arose in the Ionian Greek world with the pantheists Thales of Miletus and Xenophanes of Colophon. While Xenophanes rejected the gods of his time and recognized the principle of unity with the universe, Thales is credited with the maxim, “Know thyself”. Other classical Greek humanists who relied on reason and criticized superstition include Anaxagoras, reputedly the first “free thinker”, his pupil, Pericles, Democritus and Protagoras, and Thucydides.

Epicurus, the first Greek philosopher to admit women into his schools, challenged belief in the afterlife while also tackling the problem of evil, showing the ability of the philosopher to consider moral questions apart from the supernatural. 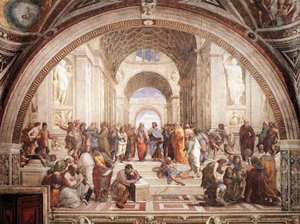 Humanism re-emerged in the late Middle ages and Renaissance as an intellectual movement in western Europe. The Italian poet Petrarch was possibly the first pre-modern humanist and was the first to identify a definite “dark age” between the fall of the western Roman Empire in 476 and his own time. As a solution to medieval “ignorance”, Petrarch suggested the study of classical liberal arts, such as rhetoric, poetry, and grammar, by figures such as Cicero. Many scholars agree that these medieval humanists were not secular humanists in the modern sense, but were often involved in the church and were sometimes even priests.

Religious humanists believe in sufficient evidence for the existence of God, but they do not accept claims of Biblical inerrancy, while secular humanists generally find insufficient evidence for the existence of God, and hence many of them are atheists or agnostics. In addition, humanists emphasize the importance of life in the present world rather than in an afterlife. Of itself, atheism has nothing to say about morality or life purpose — it is simply the doctrine that there is no God. Since atheism concerns itself with the existence of God, and not necessarily human virtues, humanism takes up where atheism leaves off by shifting the focus back on these virtues. In their effort to realize humanity’s full potential, modern humanists often endorse scientific skepticism and the scientific method. Social justice issues are central concerns for all humanists; among these issues are gender and racial equality, reproductive rights, civil rights, freedom of and from religion, and separation of church and state.

Humanism has no sacred text which codifies humanist beliefs. However, the writings of many humanists over thousands of years comprise an informal, evolving canon. Important early figures in humanism were Socrates, Aristotle and Confucius, all of whose works were seminal in the development of the philosophy. Among the most important modern humanist philosophers have been Brand Blanshard, a professor of philosophy at Yale University, and Thomas Hurka, a professor of philosophy at the University of Calgary. In general, humanists place a great deal of emphasis on living a full life, with a rich variety of experiences and accomplishments, and in contributing to the quality of life of others as well. Those who try to make the world a better place are living humanistically.

Humanists do not believe in self-realization at the cost of “weeding out the weak”. The phrase “survival of the fittest” is derived from the theory of evolution originally proposed by Charles Darwin. They do believe that human beings, like every other living thing, evolved from simpler organisms, but they believe that the evolutionary process itself does not provide an ethical standard. Like many religions, humanism endorses the golden rule: “Do unto others as you would have them do unto you.”

The attitudes of humanists towards the world’s religions vary widely. Some humanists, having been persecuted for their convictions, or seeing religion as superstitious, have an active dislike of all forms of religion; others recognize value in religion, though in a very questioning, seeking way; others yet are somewhere in between, seeing religion as a mixed blessing which consists of both oppressive or irrational dogma as well as universal human principles.

Many humanists believe there is great need of religious reform and enlightenment. While advances in science and technology have been highly profitable, and thus practical to invest in, philosophy has generated few, if any, fortunes, and has therefore had fw benefactors in the business sector. The consequence, from a humanist perspective, is that we have become spiritual barbarians in possession of tremendously powerful weapons and tools. Hence, humanists see a need to return to a state of self-reflection.

Although it has been argued that God is necessary to define morality, history has shown otherwise. The Japanese, for example, developed an ethic known as Bushido which was non-spiritual but nevertheless served as a code of conduct; although a mixed blessing, it was at least no more destructive than organized religion. Similarly, the Chinese philosophy of Confucianism has served as a non-spiritual code of ethics for the Chinese, largely with beneficial effects. Just like everybody else, these humanists have shown moral lapses due to the fallibility of human nature; nevertheless, both of these non-religious doctrines served large numbers of people well for long periods of time.

Critics of humanism might wonder how humanists can think of life as meaningful without considering the existence of God. However, many humanists would point out that life is meaningful because of good relationships, meaningful work, and so on, and that these things are valuable whether or not there is a God to make determine their value. For humanists, God would commend these things because they are intrinsically valuable, and not just because God exists to deem them so.