I transmit but do not create. I place my trust in the teachings of antiquity.
- Confucius, Analects VII

Confucianism emphasizes harmony within human society, and to that end promotes a form of etiquette by means of which a civilization can achieve astounding and fulfilling spiritual and material greatness. This etiquette is the natural result of education, and by means of Confucianism one may learn of and practice right behavior with immediate benefit. Confucianism bears a strong resemblance to Western Secular Humanism; however, it has a legacy of academic excellence nearly unbroken for over two-thousand years.

Confucianism is a world religion embedded into Chinese folk religion and within Korean and Japanese social values. Since the twentieth century it has attracted converts in Europe and the United States without active solicitation. 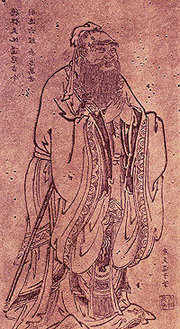 Confucius was a great teacher born in China ca550 BCE. The major teachings of Confucius refer to a concept of li, which is a Chinese word meaning “offering” but which refers to formal ritual. Confucius loved li and used it as a means to inspire participants to profound accomplishments; at the same time, he sought to create the society which could appreciate, rather than simply perform, li. A related concept is that of ren, which is both a feeling of love for others and the attribute of benevolence. Within Confucianism, a person who is ren practices li. This lifestyle benefits society in measurable ways, while granting personal success and spiritual fulfillment to the practitioner.

The core value in Confucianism might be politeness. Whereas many other religions are introspective and private, Confucianism regards each person's active involvement in a community as being the means to fulfillment. Civility is a matter of respecting fundamental relationships, those being:

These mutually beneficial relationships are permanent, even beyond death. In this way the relationships become part of a spiritual system of ancestor veneration, often improperly called “ancestor worship.” Furthermore, the status of any position in this hierarchy is continually maintained by a system of merit. Such severance of interpersonal bonds is never done lightly;renideally leads to conflict resolution before problems arise.

Confucianism’s open canon is standardized from these traditional texts:

Confucianist social theory offers immediate benefits to all practitioners, regardless of spiritual beliefs, but the philosophy might be best grounded in religion as Confucius himself taught it should be. Li ultimately results in betterment to participants, so although it might mention Tian (heaven), all of the benefit comes from its actual execution and not from a divine response to li. The Yi-jing (I Ching)elaborates on spiritual concepts of a force called qi; Confucianism sees more physical explanations for benefits from qi than a related religion, Taoism.