The heart of the person before you is a mirror. See there your own form.
- Traditional Shinto maxim

Shinto is the religion culturally and geographically tied to Japan. Its practice of acknowledging kami (spirits) dates to at least 100 BCE, which coincides with Japan’s founding as a state.

Shinto practices are animistic, meaning they recognize that kami reside in living and non-living things, and they are shamanistic, meaning that Shinto adherents are able to utilize the kami nature of things in controllable and useful ways. Typically, Shinto is used to purify people, places, and things of troublesome spiritual pollution. Shinto ceremonies themselves are often exceedingly formal by the standards of many other religions; however, this formality is an entirely pleasurable experience within the context of Japanese culture.

Kami are typically petitioned for worldly favors such as reward for good performance in school or work, protection on trips, or for success toward a building’s purpose at its dedication. Before Kami are consulted the associated people, objects, and places are ritualistically made clean through a process called O Harae. O Harae is performed with the help of a Shinto priest, who directs various rituals involving washing with water, the sprinkling of salt, or the shaking of onusa, wooden wands with paper streamers attached. 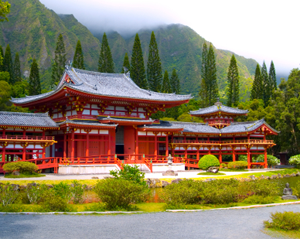 Kami are separated from the human world symbolically by a torii (gate), which traditionally is made from two horizontal supports born by two vertical supports, all painted red. Torii can be large works of architecture or small enough to sit on a desktop; all sizes are religiously significant. Torii mark the entrance to Shinto shrines, but the use of natural environment to complement the human element of proper protocol characterizes the shrine experience as a whole.

Shinto puts emphasis on successful living, and has little to say of an afterlife. Yomi, the land of the dead, is taught as the likely destination of all deceased. It is described as a gloomy, boring, resting place for spirits.

Shinto acknowledges a pantheon of specific divine personalities in addition to other, less differentiated kami. Amaterasu, the Sun Goddess, has a tie to the lineage of the Imperial Household of Japan as well as a connection to the Imperial Regalia of Japan. These Three Sacred Treasures - a sword, a jewel, and a mirror – have recorded history dating them as over one-thousand years old and are material objects representative of Japan’s status as a spiritual protectorate under kami. 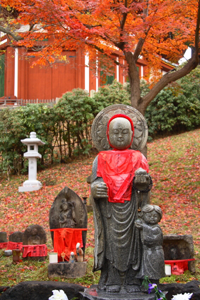 Japanese tend to view religion in a pragmatic way, and typically see no conflict in exploiting only the best parts of various religions. An example of this is the custom of overworked students to pray at Shinto shrines before exams. These same Japanese might later look to Christian churches to perform marriages, because they like the idea of God blessing a marriage. On another occasion a Buddhist temple would be sought to perform a funeral, because Buddhists are thought to have the most pleasant things to say about death and rebirth. Whatever other religious traditions are celebrated, the kami are always there to help when asked.