Tenrikyo is a Japanese religion with about two million followers today, most of whom live in Japan. It is a newer religion, having been founded in the 19th century by a woman, Miki Nakayama. It is a monotheistic religion which believes that God, or Tenri-O-no-Mikoto, revealed wisdom through Nakayama and certain other people. Although reincarnation is part of Tenrikyo, its practitioners focus on cultivating worldly happiness, known as the Joyous Life, through charitable acts and kindness towards others.

Miki Nakayama founded Tenrikyo in 1838, when she felt the presence of Tenri-O-no-Mikoto while assisting in a Buddhist exorcism meant to cure her husband of illness. Nakayama began to teach Tenrikyo to others, including another person, Izo Iburi, who also received revelatory messages from Tenri-O-no-Mikoto and did much to spread Tenrikyo, as well as compile his and Nakayama's messages into formal texts. Government pressure forced Tenrikyo to become absorbed as a Buddhist sect for a while, but was later recognized by the Japanese government as a sect of Shinto, despite having a different theological nature than the polytheistic Shinto faith. Tenrikyo distinguished itself at this time due to its followers' humanitarian acts, such as founding orphanages and schools for the blind. After World War II, Tenrikyo practitioners asked the government to remove it from its status as Shinto sect, and Tenrikyo then got rid of much of its Buddhist and Shinto influence, although it still has retained some aspects of traditional Japanese worship practices. Today, a lack of political restrictions on Tenrikyo has allowed it to flourish in conventional society. 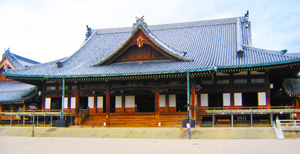 Followers of Tenrikyo hold God to be an entirely benevolent creator, who allows reincarnation but encourages the happiness of mankind during their mortal lives. To this end, Tenrikyo practitioners attempt to follow the path of the Joyous Life, which involves charity and mercy to others, and rejection of negative actions that would come out of greed, anger, or arrogance. Practitioners believe in the continual construction of a better world through small acts of daily kindness. To this end, many Tenrikyo followers have founded or participate in disaster relief programs, orphanages, hospitals, and schools. Music is important in Tenrikyo, and instruments are played in both daily and monthly services, although the prayers said during these services can be performed on one's own, if one cannot attend a temple at that time. Many followers of Tenrikyo also hold tenets of Christian or Buddhist beliefs.