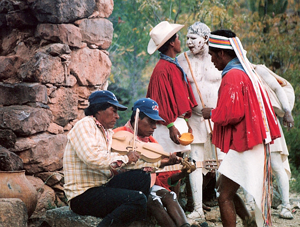 The Tarahumara is a tribe of indigenous people of the northern regions of Mexico. Although they were originally from what is now the state of Chihuahua, the Tarahumara, also called the Raramuri, now inhabit the Copper Canyon in the Sierra Madre mountain range where they have lived since the coming of the Spaniards in the 16th century.

The Tarahumara tribe is best known to the western world for their athletic ability in long-distance running. The population of 50,000 to 70,000 Tarahumara that exist today remain largely a traditional people, living exactly as their ancestors did hundreds of years ago. Although separate villages are some distance apart, they maintain contact with the only means of transportation they have ever used - running. From an early age, the Tarahumara train their children in the art of long-distance running for both practical reasons and to keep tribal tradition alive. To celebrate their running skills, they play a game as they travel called "foot throwing" where they kick a ball back and forth amongst each other in a sort of relay. Individual games can last anywhere from a few hours to several days.

Notable amongst the Tarahumara people are their religious beliefs which have incorporated some western traditions, such as Roman Catholicism, through the ages. One of the most important beliefs they hold is that the afterlife takes place on a mirror image of the real world. Because of this, it is important that spiritual deeds be done to improve life in the real world so that it can be reflected into the spirit world.

Science tells us that the Tarahumara people settled into Mexico 15,000 years ago after a 5,000 year migration from Asia over the Bering Strait. The Tarahumara people tell a different tale. Their origin story begins with the sun and the moon. The sun and moon are siblings who, in the first days, dressed in leaves of palm and the only light to reach Earth came from the morning star, a louse from the head of the sun. The moon noticed the louse and ate it, plunging the world into total darkness. The early ancestors erected tall crosses of redwood, soaked them in alcohol and set them on fire, burning off the palm leaves and allowing them to shine in the sky. The sun and moon grew angry and flooded the world, destroying everything except for a one Tarahumara boy and one girl who hid in the mountains with three kernels of corn and three beans. After the flood, the corn and beans were grown into a bountiful harvest and the boy and girl procreated, creating the Tarahumara tribe of today. 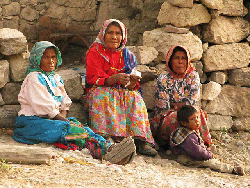 The religious rituals of the Tarahumara often involve the ingestion of intoxicants. Alcohol is celebrated amongst the people and being drunk is considered an enlightened state, and not a reason for shame like it is in the west. Drunken festivals are said to provide a means of venting violent emotions. Fighting and adultery are common at these festivals and an occasional murder is not unheard of. However, the perpetrators are rarely, if ever, blamed for their actions. It is said to be the fault of the alcohol, not the person. Another narcotic used in religious ceremonies is peyote, with the hallucinogenic ingredient, mescaline. These ceremonies are much more somber than those involving the alcohol.

The deities worshiped by the Tarahumara have a mix of traditional elements with Christianity. They believe in a God and Devil but they are brothers. God has a wife and several sons (sukristo) and daughters (santi). These sons and daughters show themselves in the real world and are represented by the medallions and icons of the Catholic saints. God and The Devil are jointly responsible for the creation of humanity but with one large difference. God created the Tarahumara people of pure clay, whereas the Devil created all other people by mixing ash into the clay, so they are not pure. It is important to note, however, that the Tarahumara Devil is not necessarily considered evil. The Devil is the older brother and God often collaborates with him to meet out justice and punishment for those who deserve it.