Established in France in the nineteenth century, Spiritism is often referred to as French Spiritualism. It has since spread through many countries including the United States, Canada, Spain, Japan, Germany, and England. Currently, Brazil has the largest number of followers of any country. In general, the idea of Spiritism is a belief in the existence of spirits, and has been influenced by other fundamental world religions.

Spiritism began as a result of events seen and experienced by Allan Kardec who believed he was witnessing the work of spirits. The writings of this Frenchman, about a communication with spirits, was expanded and further established by other well-known writers. Arthur Sir Conan Doyle, Johannas Greber, and Ernesto Bozzano were fundamental in the creation of this spiritual practice. Kardec himself states that much of his ideas behind Spiritism came from such important philosophical and religious leaders as Socrates, Plato, Francis of Assisi and even Jesus of Nazareth.

Quite unusual from other practices such as this, Spiritism does not proclaim itself to be a religion. No membership or organized following is necessary, and this practice seems to be more intellectual and spiritual than strictly religious. "Followers" of Spiritism participate in regular bi or tri-weekly meetings, youth and children meetings, healings, lectures, book fairs, and Spiritist Week.

The doctrine of Spiritism, an interesting combination of spiritual concepts from Christianity, Positivism, and Platonism, is outlined in numerous books. Spiritism has five main points of doctrine followed by some further beliefs in relation to Jesus, evolution, karma, and communications with the spiritual world.

Spiritism states that there is a God over all as well as spirits who have the ability to improve and perfect themselves. Spirits perfect themselves through gradual reincarnation, while communication and interfering in the lives of human beings. It is also said that life exists on other planets beside the earth. 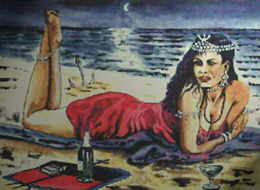 This non-religion spiritual life has received some criticism since the World Wars, though it certainly does not gain as much negative attention as other fundamental world religions. For the most part, Spiritism has been attacked very little perhaps due to being a relatively unknown spiritual practice.

Spiritism lives on in modern culture, seen in a number of movies, television programs, and soap operas. Perhaps some mentionable titles including Spiritism are The Sixth Sense, Passengers, and Ghost Whisperers. Because Brazil claims the largest numbers of Spiritists, the country also broadcasts four soap operas which include Spiritism as part of the plot line.