There is only one breath. All are made of the same clay. The light within all is the same.
- Guru Granth Sahib, page 96

Sikhism was a religion founded in the northwestern Indian subcontinent through a revelation from Almighty God to Nanak (born 1469 CE), who gained the title Guru (teacher). Guru Nanek appointed a successor, as did each in a line of successors. By the early 1700s it was known that there would not be another human Guru, but rather the book Guru Granth Sahib would act as perpetual Guru thenceforth.

Sikhism has an unusual undercurrent of thought in assuming that one’s religion might be an un-chosen matter of birth as it relates to geography or era, and therefore one is only partially responsible for participating in it. By this circumvention of elitism the Sikhs traditionally establish a magnanimous sense of brotherhood between themselves and other faith traditions.

Sikhs accept concepts of karma and reincarnation but teach that Almighty God ultimately grants salvation. Descriptions of places such as “heaven” or “hell” in this scheme have little meaning.

Sikhism stands out as a social movement as well as a religion. Sikhs strive to treat all people equally, regardless of religion, gender, social status, or any other factor commonly used to enforce discrimination.

While Sikhs personally value their religious beliefs over all others, they recognize that their personal beliefs may not be equally valuable to others. Sikhs claim that there are multiple ways to please Almighty God, and that they themselves are but one group of God’s children. Almighty God offers salvation on some other basis than perfunctory choice of religion.

Sikhs themselves stand out instantly in public by five outward signs, these being

Each of these articles is related to Sikh values as taught by the Gurus. Note that during youth, Sikhs typically are casual about displaying these signs. After an initiation with Amrit (holy water) the Sikh is considered Khalsa. Anyone undergoing this ceremony chooses Sikhism over other faith systems. 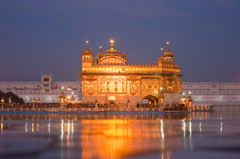 Sikhs have neither priestly class nor central religious authority. There is an organization called the Shiromani Gurdwara Prabandhak Committee (SGPC) who are responsible for civil matters relating to the upkeep of Sikhism as a religion; it also is a political entity for the Sikhs as a nation. Leaders in the SGPC are democratically elected.

The Harmandir Sahib (Golden Temple) in Amritsar, Punjab, is the most culturally and historically significant Sikh religious center; however, all places which contain the Guru Granth Sahib are equally worthy of being a place of worship.