Juche is the official ideology of North Korea. The word Juche is translated to "self-reliance" in the Korean language. The religion was originally created by Kim Il-sung, a Korean communist politician, in 1956. Juche was originally more of a political ideology than a religious one. However, during the early 1960s, Juche transformed into a much more spiritual ideology.

Kim Il-sung defined Juche as “the independent stance of rejecting dependence on others and of using one’s own powers, believing in one’s own strength and displaying the revolutionary spirit of self-reliance.” Outsiders often define the ideology as a mandatory philosophy that calls for loyalty to the communist party.

In 1965, Kim Il-sung outlined three fundamental principles of Juche: chaju, or independence in politics; charip (self-sustenance in the economy) and chawi, or self-defense in national defense. Kim Jong-il, the current political leader of North Korea, also recognizes Juche as the official ideology of the nation, and has declared himself the main and final authority on all matters concerning the Juche Idea.

Today, it is widely debated as to whether or not Juche can truly be defined as a religion. Many people argue that Juche fits into the category of religion, as it has millions of extremely devoted followers. Sociologists argue that Juche is indeed a religion, and more of a religion than either Chinese Maoism or Soviet communism. According to Thomas Belke, author of "JUCHE: A Christian Study of North Korea's State Religion", Juche is clearly a religion, with "more adherents than Judaism, Sikhism, Jainism or Zoroastrianism." Those who believe Juche is a religion also point to the fact that Juche has adopted several of the ideas promoted by Confucius. In addition, there are a number of "ceremonies" conducted in the name of Juche, as well as what outsiders often label "holy sites." 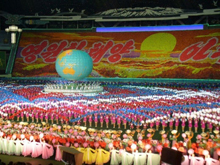 Still, promoters of Juche define it as a secular philosophy rather than a religion in the traditional sense. They often point to the fact that it was created by Kim Il-sung as a means of staying out of the conflict between Soviet Russia and Communist China, not as a result of a near death experience or an experience involving some sort of "God" or God-like figure. Also, followers of Juche claim to be atheists and as such, feel that following Juche can in no way be religious.

Whether or not Juche is truly a religion, with millions of followers, it certainly has an impact on today's world!