Cao Dai, or, to give it its full title, Dai Dao Tam Ky Pho Do, is a religion that originated in South Vietnam in 1926. Dai Dao Tam Ky Pho Do translates into 'Great Religion of the Third Period of Revelation and Salvation' and adherents believe that the sect was created directly by God through his communication with its first four disciples. Cao Dai means 'Kingdom of Heaven' and the religion's ultimate goal is to free the believer from the repetitive cycle of birth and death.

The monotheistic Cao Dai saw the light of day in 1926 in the South Vietnamese city of Tay Ninh when, according to Caodaiist belief, God communicated directly with four followers and instructed them to establish a sect that would unite competing religious beliefs and assist people in joining God the Father in Heaven Armed with, literally, heaven-sent information about the new religion's symbolism, teaching and hierarchical structure, the disciples established Cao Dai as an alternative to existing religions and as one which equally revered such usually mutually exclusive figures as Jesus Christ, the Buddha, Confucius and Laozi.

The initial four disciples were Cao Hoai Sang, Ngo Van Chieu, Pham Cong Tac and Cao Quynh Cu and, to date, they have been the people to have the greatest influence on the religion. Ngo Van Chieu later broke away from Cao Dai, however, and established the splinter sect called Chieu Minh, and at the same time refused appointment as the first Caodaiist Pope.

Today Cao Dai has between 2.5million and 8million adherents in Vietnam, with a further 30,000 living in Australia, the USA and Europe. Although Cao Dai may be structured so that it's hierarchy resembles that of a democracy, the religion itself is anti-confrontational and does not involve itself in the politics of the countries in which its followers live.

In a nutshell, Caodaiists follow paths of nonviolence, prayer, the veneration of ancestors and vegetarianism so as to reach their goals of uniting with God and being released from the birth/death cycle. Followers are divided into three separate classes based upon which level they have reached in The Three Teachings, and these classes are, from lowest to highest, saint, sage and Buddha. Caodaiists also believe in gender equality, although women are not permitted to join the two highest Caodaiist religious ranks, and worship both God the Father as well as the Mother Buddha. 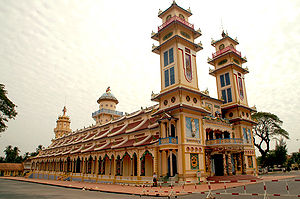