I am the way, the truth, and the life. No one comes to the Father except through Me.
- Jesus of Nazareth, Bible, Book of John 14:6

Christianity is a system of faith which promises infinite divine benefit to its adherents and possibly infinite divine punishment to its detractors. Its adherents are commonly understood to be those people who adopt a belief system defined by Almighty God and originally given to select members of mankind for the purposes of human dissemination and proselytization.

Jesus of Nazareth was born into a family of low economic class in approximately 1 CE, (his birth defined the modern dating system), in what is currently Palestine. The manner of His birth was unusual and fulfilled interpretations of Jewish prophecy in what Christians call the Old Testament. Before he reached adolescence he displayed unnatural wisdom beyond human education.

When Jesus was thirty years old He became an itinerant preacher and miracle worker. At this time He made statements which define the purpose of human existence. Also at this time Jesus of Nazareth revealed that He was, in fact, God incarnate as a man. As part of His purpose on earth Jesus submitted Himself to the human legal system and accepted a resulting governmental death penalty.

His death became the last instance of blood sacrifice in the Jewish tradition and is thought to atone for all possible sin, due to the infinite value of the divine human sacrifice. This fulfilled Jewish prophesy, as did His miraculous resurrection three days after His death.

The key concept in Christianity is that there is a protocol by means of which one may use that blood sacrifice to pay for personal failings which have offended God, who requires retribution in His capacity as ultimate judge. God has some just method for deciding a person’s fate as a reincarnated spirit in the afterlife, and this decision is related to an individual’s utilization of the blood sacrifice of Jesus. 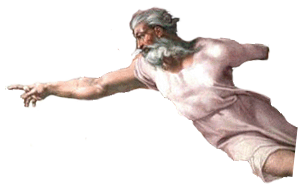 Christianity has a closed canon of doctrine within an authoritative book created by God through men in generations after the advent of Jesus; this book is the New Testament and together with the Old Testament makes up a set of works called the Bible.

Christianity’s largest authoritative body is the Holy See - commonly associated with either the Vatican or the Pope - which presides as head of the organization; fewer than half of all Christians recognize the authority of this body. Probably the most concise statement of Christianity is in the Nicene Creed or its derivatives; the sects of Christianity can generally be categorized by their reaction to this short document.

Most of Christianity for most of history has held that those who die without accepting the doctrines of Christianity are doomed to Hell, a horrible fate in the afterlife. Because of this, many Christians insist that non-Christians be exposed to Biblical teachings. Some Christians consider the human-directed conversion of non-believers to Christianity to be more important than any other endeavor.

This belief is balanced in an informal way with the stronger notion that Almighty God is infinitely just, merciful, and loving; many believers find that they must reconcile that primary doctrine against all other doctrines, which are secondary.