Scientology is a controversial religion that focuses on people as immortal beings who have fallen off of the correct path. Using a system called auditing, members work through problematic events in their lives to become spiritually liberated. Although exact numbers are difficult to determine, the estimate of people who practice Scientology is anywhere from 55,000 to three million.

Scientology was founded by L. Ron Hubbard, incorporating his earlier work with a practice called Dianetics. Hubbard was a science fiction writer, who quickly garnered supporters when he released his book "Dianetics: The Modern Science of Mental Health." In 1951 Hubbard designed the "E-meter," the tool used by members as an auditing aid. One year later, Hubbard wrote the specific teachings of Scientology, and in 1954 supporters of Hubbard created a Church of Scientology in California. After this the religion grew quickly, spreading to other countries such as Britain, Australia, and South Africa. 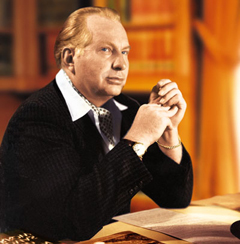 L. Ron Hubbard was one of the most instrumental people in shaping Scientology; however there were others who played significant roles. Dr. Joseph Winter worked with Hubbard to have Scientology accepted by the medical community. Some of Scientology's biggest supporters are celebrities. Hubbard himself encouraged celebrities to join the religion, even creating "Project Celebrity," a list of famous people he asked to join the religion. Current celebrity members include Tom Cruise, Katie Holmes, Marie Presley, Kirstie Alley, and John Travolta.

Scientology is as complex as any religion. The main belief involves the thetan, an individual's life force. This is believed to be a person's real identity. It is believed that thetans fell off their path when they became too involved with their creative creations, rather than their spiritual nature. As time went on, thetans became only beings, losing their memory of their former selves. In Scientology, thetans are reborn many times, similar to reincarnation. Those in the religion are attempting to fully develop their spiritual selves and gain freedom. This is accomplished by making donations to the church and receiving materials and audits to further their growth. The process of this spiritual growth is called the Bridge.

Controversy surrounds Scientology, with many scientists and governments claiming it is nothing but science fiction at best, and a cult at worst. In areas outside the United States, Scientology does not receive tax-exempt status as a religion, and is viewed with skepticism. It is continually questioned.