Natural Law asserts that humankind has inherent in its very design, as evidenced by its very existence, certain inalienable and God-given rights. These rights can be readily determined by assessment of actions for harm and benefit; if a certain action is beneficial to a person, and if that action causes no harm to others, then execution of that action should be an inherent right associated with human existence.

Natural Law is also the name given to the social and religious movements which spontaneously arise in civilizations of all eras when a minority group faces oppression from a society which enacts decisions against natural law. Currently, homosexual persons who petition for equal rights under governmental law have a claim that Natural Law is on their side against civil prohibition of gay marriage.

Practitioners of natural law believe prejudice is a social ill which resurfaces, causing strife in all ages. It must be recognized to be understood and fairly judged to be extinguished, leaving merit and the inherent value of the soul as the measure of human worth.

Persons citing Natural Law as a cause for social change have typically done so with an abundance of scientific backing, but at the risk of societal backlash. Victories over societal and religious injustice include the repeal of discrimination based on gender, creed, class, caste, age, race, skin color, and sexual orientation.

During the 1940s, Germany’s fascist Nazi political regime rounded up millions of people who were members of groups which, by Natural Law, had a right to liberty. Alleged homosexuals comprised one of these groups; all gays were labeled with a pink triangle sewn onto their prison clothes as the first step on a planned route of extermination. In response to this atrocity, gays have reclaimed the pink triangle as a symbol of pride and willingness to fight back whenever oppression rears its head again. Interestingly, both the Christian cross and pink triangle are former symbols of execution. 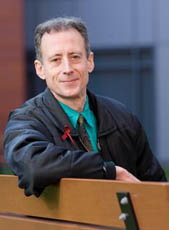 Natural law has also confronted religious oppression of minority groups. Columbia University Biblical scholar Morton Smith claims that in 1958, at the Mar Saba Monastery near Jerusalem, he found a fragment of a letter from Clement, Bishop of Alexandria, to Theodore, the priest of an early Christian community. The letter includes a suppressed passage which was omitted from the text of St. Mark, chapter 10 (between verses 34 and 35 in the standard version of the Bible). The passage, dated ca. 95 CE, relates how Jesus went with a wealthy youth to the latter’s house; after staying six days, Jesus “instructed” the boy, who came to Jesus later that evening, scantily clad, at which point Jesus “taught him the mystery of the Kingdom of God.”

In an attempt to expose this suppression, human rights activist Peter Tatchell argues there is scant information on Jesus’s sexuality: “Since there is no proof of the heterosexuality of Jesus, the theological basis of Church homophobia is all the more shaky and indefensible.” According to Tatchell, the “Church sanitized the gospels, removing references to Christ’s sexuality that were not in accord with the heterosexual morality that it wanted to promote”.