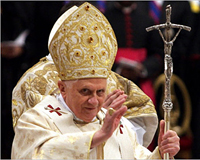 With more than a billion members, the Roman Catholic Church, or more commonly, the Catholic Church, is the oldest and largest Christian denomination in the world today. At its head is the Pope, who, it is believed, can infallibly and dogmatically define Christian teachings on theology and morality. Ignatius of Antioch is the first person known to have referred to the "Catholic Church." It appears in his Letter to the Smyrnaeans, written around 107 AD.

Unlike Protestant churches, which hold to scripture, and scripture alone, as authoritative, the Catholic Church teaches that there are three sources of authority: the Scripture, Sacred Tradition, and the Church's interpretation of the first two. The main source for the official teachings of the church can be found in the Catechism of the Catholic Church.

Catholics and Protestants agree on many of the major Christian doctrines, such as Jesus' virgin birth and sinless life, the incarnation and the Trinity, the bodily resurrection, and the Second Coming. However, there are major differences regarding authority, salvation, and faith. While the Catholic Church accepts both the Bible and church tradition as authoritative, Protestantism believes the Bible to be the sole authority on matters of belief and worship. Protestantism teaches that salvation is by grace, and grace alone, which is given to the believer directly by God at conversion. To this the Catholic Church adds sacraments as another way to achieve grace.

In fact, it is believed and taught in Catholicism that Christ himself instituted seven sacraments. The Sacraments are: Baptism, Confirmation, the Eucharist, Reconciliation, Anointing of the Sick, Holy Orders, and Holy Matrimony. Sacraments are viewed as rituals that symbolize God's presence. All of these sacraments are seen as actual channels of God's grace to all those who willingly receive them. 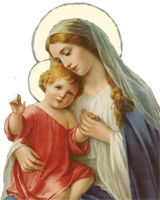 The Virgin Mary holds a distinctive position in Catholicism, and Catholics offer her devotions and prayers. The most well-known Marian devotion is the recitation of the Rosary. It is believed that Mary, the mother of Jesus, conceived him without the taint of Original Sin. This doctrine is known as the Immaculate Conception. The Assumption of Mary is the belief that Mary was assumed bodily into heaven at her death. These teachings are not to be found in the Bible. Instead, both are doctrines that have been dogmatically defined by popes, and, therefore, must be believed by faithful Catholics. Many Catholics believe that the Virgin Mary has appeared personally to people, and these are known as Marian apparitions. These apparitions have been given some support by the Church as credible, in particular Lourdes and Fatima.

Like all Christians, the Church believes it was founded by Jesus Christ in the 1st century A.D. He appointed twelve apostles, with Peter as the head apostle. The Pope and his cardinals are held as the successors to Pete and the Apostles. The Church's pubic ministry began at Pentecost, when the Holy Spirit came upon the apostles. The apostles gained converts from Jewish communities scattered around the Mediterranean Sea area. As St. Paul began to convert Gentiles, Christianity spread rapidly throughout the Roman Empire. Christians began to see themselves as members of a separate religion, distinct from Judaism.

In the beginning, the church was loosely organized, and it was not until well into the second century that a more organized, hierarchical authority structure began to emerge. Originally a bishop would have authority only over the priests in his own city. Eventually the organization of the Church began to more closely resemble that of the Empire. Bishops in the more politically important cities, notably Rome and Antioch, began to assert their authority not only over their own clergy, but over other bishops as well. By the 3rd century, the Bishop of Rome began to assert more and more authority over other bishops, acting as arbiter of disputes among other bishops.

Christianity was legalized in 313, and declared the religion of the Empire in 380. In 325, the First Council of Nicaea convened and promulgated what became known as the Nicene Creed. This creed established basic Christian teachings. In addition, it divided the church into administrative areas for the first time, called dioceses. The Council of Rome, held in 382, established the Biblical canon. Eventually, the early Church came to be organized under the three patriarchs of Rome, Alexandria and Antioch. These three bishops were viewed as equals. The Bishop of Rome, however, saw himself as the successor of Saint Peter. As it was generally agreed that both Saints Peter and Paul were buried in Rome, the early Bishops of Rome saw this as further confirmation of their supremacy.

The year 431 saw the first large rupture, or schism, occur in the Church. The Council of Ephesus, held that year, stated that because the humanity and divinity of Jesus are inseparable, his mother Mary was necessarily the Mother of God. She was given the title Theotokos, which means God-bearer. Those who refused to accept the Council's ruling are represented today by the Assyrian Church of the East. The next major break was after the Council of Chalcedon, held in 451. This Council declared that Christ was one person with two natures. The Church in Alexandria rejected the teachings of this Council, and today these Churches are referred to as Oriental Orthodox Churches.

The 11th century saw the next major division in Catholicism, when the East-West Schism occurred. Differences in doctrine, church government, and worship practices that had developed over the centuries lead to a split in the year 1054 that divided the Church between East and West. Most of Western Europe was in the Western camp, while Greece, Romania, Russia, Syria, Turkey, and Egypt made up the Eastern camp.

The greatest division in the Church occurred in the 16th century with the Protestant Reformation. At this time many not only rejected the structure of the Catholic Church, but many of its teachings. This last division would prove to be the most devastating, and the most permanent. Today, slightly less than half of the world's Christian population is a member of the Roman Catholic Church.