After being announced back in January 2017, the travel ban sparked immediate national outrage and led to raucous protests at airports across the country. Opponents of the policy denounced it as a de facto "Muslim ban" and accused the president of intentionally discriminating against Islamic peoples. Although there were several non-Muslim countries on Trump's list, critics insisted the policy was motivated by a clear hostility toward Muslims. As evidence, they pointed to his harsh anti-Muslim rhetoric during the presidential campaign.

After numerous states mounted legal challenges, a lower court eventually ruled the travel ban was unconstitutional. However, this latest Supreme Court ruling overturns that decision, and the White House is now free to prevent people traveling to the U.S. from the countries in question.

Religious Leaders Ask: "Is This Justice?"

Reactions to the Supreme Court decision were predictably split along partisan lines. But one contingent was especially vocal in the wake of the ruling: evangelical leaders. The president of World Relief, an evangelical-run refugee organization, issued a strong statement following the news:

"While we respect the authority of the Supreme Court on these matters, we also believe it is vital that we, as a nation, affirm our core commitment to religious liberty for all people. Though the court may have found these restrictions to be lawful, that does not necessarily mean they are right or just A person's religious tradition should not disqualify them, explicitly or implicitly, from being considered for a visa to enter the United States."

"Law and policy serve as sacred documents for the secular world; reflecting back to society what it believes are good and just ways to live together in the world. What message does it send to our Muslim neighbors, many of whom are fleeing persecution, when U.S. law declares that it is fine to break families and purge people groups and let them die based on fear of the other?"

However, some evangelical leaders backed the decision, arguing that the Bible's message of "love thy neighbor" is not a mandate to let whoever wants to enter America do so. Barring people from coming to the U.S especially potential Islamic extremists is simply a matter of public safety, they point out.

Among the groups that voiced support for President Trump was the Faith & Freedom Coalition, which released a public statement on the matter:

"The over 1.8 million members and supporters of the Faith & Freedom Coalition support the Trump administration's policy of strictly vetting foreign nationals from countries plagued by civil war, terrorism and radical Islamic extremism that pose a danger to our national security." 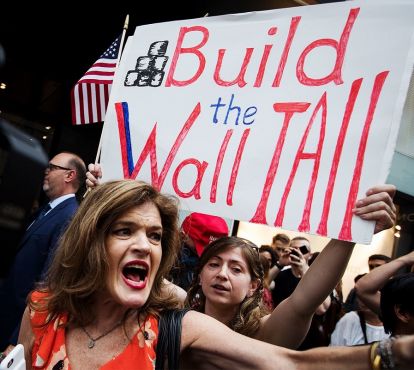 Amid the heated immigration debate of recent years, an interesting phenomenon has been observed: despite espousing common Christian values such as compassion for others and helping the less fortunate, studies show that evangelicals are among the groups most opposed to immigration.

These results beg the question: what's driving the hostility toward immigrants? Is it simply a matter of economic and job issues? Safety concerns? Or perhaps there's something deeper at play: an underlying fear of "the other" whether that be people of a different religion, a different language, or a different nationality.

Are religious groups right to oppose immigration, or does this stance conflict with the moral foundations on which their faith is built?