People who live in glass houses shouldn't throw stones, so goes a popular saying. While Christianity is still the world's largest religion, Islam is not far behind. In fact the three faiths; Christianity, Judaism and Islam are closely related, even having emerged out of the same part of the Middle East. Yet all of them are somewhat different in their customs, traditions and religious practices. Even the culture of their followers differs widely. While the civilized religions of the West are quick to admonish the Muslims as having practices that are stifling to women in terms of dress code and keep them behind the four walls of a house, thus relegating them to the status of second rate citizens, we in Western Society often fail to look at our own dirty linen. Lately the ordination of women priests has been allowed by Protestants and other denominations, but is still frowned upon by the Catholic Church.

The reasons could not be more whimsical. One popular fable is that women cannot keep a secret and thus would be unable to observe the sanctity required for Confession. Yet the Church is replete with instances where a priest who, having too much to drink at a friend's place, babbled out the sins of the whole community. So this theory does not hold any weight. Another reason being put forward for preventing the ordination of female priests is that Jesus Christ and His followers the Apostles were all males; therefore we should respect this tradition and restrict the priesthood to the male community only. Amazingly this tradition is held true in Islam as well, as they prevent their women from entering the mosque. Legend has it that there was no such restriction in the earlier days of Islam, and while women used to be seated separately from the men during prayer, they used to create a disturbance or this emerged as a natural disturbance for the men, with the consequence that the entire purpose of the communal gathering was disturbed.

Thus, the Holy Prophet Mohammad decreed that women would no more be allowed in the mosque but could carry on their worship in the traditional manner at home. Further as woman was created from man's rib, as stated in the Bible, both Christianity and Islam regard woman as naturally inferior to man. The argument is that men are naturally stronger, more intelligent and less emotional than women. In any emergency circumstances, it is more likely for the women to look for psychological and moral support while a man is supposed to hold his own. While social roles have more to do with this than anything else, these truths are conveniently brushed aside. Man today is still the breadwinner and the woman the child bearer and keeper of the household in many societies. Apparently this social ordination of roles has remained uniform since the dawn of mankind.

This dogmatic approach continues in the Arab world even today. Women are supposed to dress modestly, wear a burqa or aqaba, and not look at other men. Men on the other hand can play the field and all women are fair game. A man is allowed to keep up to four wives at a time. A woman's evidence under oath is half as valuable as a man's. To add insult to injury in traditionalist Islamic societies, even the marriage is mostly decided by the parents. The divorced woman is looked down upon with disgust. Divorce consists of simply uttering the word 'Talaq' three times and the man is free of the relationship.

But now let us compare Christianity with Islam and the Protestants. It is well known that Martin Luther nailed his 99 Theses to the Church door because he felt that the Roman Catholic Church was abusing its power as it indeed was at that time. It was the time when the Holy Father could do no wrong, however papal indulgences were being conferred on those who would give donations for the repairing of St. Peter's Basilica in Rome. Luther was enraged at this state of affairs and viewed it as heresy- hence he was encouraged to post his objections on the church of All Saints on 31 October 1517, sparking the Protestant Reformation. 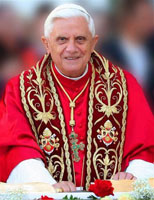 Now the present Pope Benedict XVI fears that "The fact that the church is convinced of not having the right to confer priestly ordination on women is now considered by some as irreconcilable with the European Constitution." The selfish and unnatural act of restricting priesthood to the males and preventing marriage has raised a lot of problems in recent decades. There have been many cases of homosexuality, child abuse and even clandestine affairs involving female parishioners. Sex is a natural feeling and some feel it is stupid to ignore that it exists. Living in a friary devoid of all female companionship for a long time is enough to drive some men crazy. Neither Islam nor the Protestant faith forbids marriage for its priests. It is considered a natural act. On the other hand it could be considered good for the spread of Christianity as our population would increase if priests and nuns were allowed to marry and it is likely that Church attendance would also increase if we had a more relaxed attitude. Some other things that need to be changed are that divorce should be allowed in some circumstances- it makes no sense to be stuck in a relationship for your whole life if one or both partners are not happy.

A religion should move with the times. It is amazing that while the Papacy enjoys all the modern scientific conveniences, it is not prepared to embrace modernity in its approach to the faith today. No wonder the congregations are dwindling, no one wants to be part of a dogmatic religion that has no connection with the real world.

Recognizing that women can have faith and serve God too has been admitted and is encouraged by Lutherans, Presbyterians and other denominations of Christianity. In this way, modern interfaith organizations have surpassed traditional beliefs about ordinations and have also overcome inequalities in doing so. There are some religious organizations which extend ordinations online as well. In fact, offering ordinations with little or no restrictions have served to make religious tolerance and syncretism easier among common people who may have lost touch with society's religious roots. The Universal Life Church Monastery, is a great example of such syncretism in society.

What is even more encouraging is that the First Amendment to the U.S Constitution allows for not only the freedom to do so, but benefits us by increasing awareness of religions and the practices of selecting religious officials compatible with the scientific and spiritual beliefs of the time.