What does ordination mean?  Definition of Ordination: 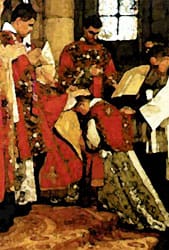 If you are ordained, you are expected by society to be different, to be a better person and to have a higher moral center in which others take refuge in. There is no discussion about it. This is what society expects of its clergy and for that degree of being "different" it grants benefits and entitlements according to this exalted status. In appreciation of being a person who assists in times of turmoil and ushers in times of joy and togetherness, and who maintains the hope of the people, the tax laws have been designed to favor clergy, but you don't get those benefits for just being a clergy person. You must actively be engaged in conducting the services of a clergy person. This is where many ULC MONASTERY ministers fail in their responsibilities. They may feel that being ordained is all they need and they are wrong - seriously wrong. Being and doing are two different sets of conditions. Yes, the ordination into the ministry legally entitles you to the title Reverend, but that is just a title. We do offer information on starting a congregation, if you so choose. Everything else society demands of an ordained minister is part of the duties of a member of the cloth.

You gain all the other aspects- the rights and privileges which are desirable, only by your own actions and nothing more. No piece of paper can do that for you, no seal, no ribbon, no notarized pen and ink signatures can provide you with the inner self-worth that the ministry can provide you through your own righteous actions.

The Monastery is dedicated to bringing you to the point in your life where you will actually officiate a marriage, to solemnize the marriage vows of a couple. The other duties of a minister are very particular to different belief systems. For that reason we concentrate upon marriages and baptism ceremonies as these are somewhat universal in Western cultures. We will assist you with any religious ceremony you wish to perform, and if we need to assist you with research so that you may fulfill your role with grace and honor, we will. 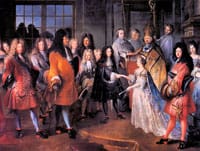 Performing marriages can seem like a scary thing. You certainly don't want to create bad memories for the couple. You need to do certain things first. You have to know certain things about your ordination; you may need to register in your state or some other state depending on state wedding law. You may feel that you do not have anywhere to turn, but you have a place to turn - you have telephone numbers you can use as contact points to help you. Where else can you turn? The Monastery is here for you; we have been here for many years, have investigated and fought for your rights to be a legally ordained minister, and you paid for those services as part of the cost of items you may order from the Monastery online or by mail.

All these aspects are included in your ordination. Only a Church or ordaining religious entity sets the requirements for ordination for that group. Requirements are different for different groups. A person may attend a ministry school for ten years and graduate knowing only the beliefs of that group. What good would that person be to an individual of a totally different belief system? This is one reason the Monastery accepts everyone just as they are. You know all you need to know to be of assistance to others in their time of need. Nothing special is required to be a caring individual, an individual who listens well and acts in the best interests of others. These are traits common to all belief systems for their ministers to have. A strong desire to act in those manners can be held by everyone.

You can add anything you like to ordination according to your beliefs and practices, but if you are not sincere, why become ordained at all? If it is just a joke to you, why not think of something else to joke about. For many individuals the Monastery is the long awaited and hoped for last chance to do God's service, to be a minister, to answer the "calling" and do something for their beliefs. Yes, for others it is a joke and in a society such as in the U.S. it is called freedom and tolerance. For the sake of many we tolerate the few. The ULC Monastery is here to assist you in all the aspects of your ministry and your ordination. As you become more and more aware of who you are, you will become less and less interested in credentials and proving to others that you are ordained. You don't have to prove anything to anyone. If you do, it will be to the state and we take care of everything in that regard. You are ordained by the ULC Monastery for life, no questions as to beliefs are asked and it is a free ordination.

Sincerity is the key in ordination. It does not matter which belief system one holds. The ULC Monastery allows each to make all such decisions at the individual level. The ULC Monastery has two guiding religious tenets: to promote freedom of religion, and to do that which is right. It is the responsibility of the individual to determine what is right, as long as it does not infringe on the rights of others and is within the law.

Ordination as a minister does not entitle anyone to engage in any activities that are unlawful. There exists no freedom of religion to engage in activities that are illegal. Freedom of religion does not mean freedom of practice. Sometimes people have misunderstood the difference. For example, it does not matter if one has a belief in using marijuana as a religious sacrament; use of that substance is still illegal and no religious activity can cover or justify its use, or shield you from lawful prosecution.

Believing that the IRS is an enemy is one ULC Monastery mistake made in its early years. The opposite is true. The IRS is there to assist in the enforcement of the tax laws of the nation. It is not an agency to punish the people, but they will when people abuse and try to skirt the lawful taxation system of the United States governement. Tax-exempt status is to be cherished and not abused. The IRS is most helpful and will work with individuals wishing to apply for tax-exempt status for a new religious organization.

To help you understand the benefits and responsibilities under the law for ministers, we strongly advise individuals to order a copy of the Zondervan Ministers Tax and Financial Planning Guide, which is available in our bookstore. This valuable resource explains what is expected of you under the laws for reporting ministerial income and filing for the advantages provided to ministers under the tax code.

It is strongly recommended that you seek a local tax adviser so that you do not fail to claim benefits to which you may be entitled and also to fully report all income. The Zondervan guide may prove beneficial in this process, as tax preparers are not always familiar with minister benefits under the law. However, it’s also important to only claim benefits if you are entitled to them. To explore further resources that might be of assistance, please visit the ULC catalog.

You must be actively engaged in the performance of the duties of a minister in your belief system. Saying a prayer before meals is not sufficient to claim benefits under the tax code. Reasonableness has to be understood by the individual and it IS understood and enforced  by the IRS.

Compensation to a minister by a church or other religious organization must be “commensurate” with the duties performed. If you are “over paid” there are penalties for that which may amount to 100% tax plus penalties. Honesty and sincerity are vital and if you do not have those traits, you may be in the wrong field of work.

Is it possible that a person can self-ordain? Yes, but there is much misunderstanding about such a status. In the Bible in John 15:16 it states: (depending upon which translation) “For ye have not chosen me, but I have chosen you and ordained you before the foundation of the earth…” If God has chosen you and ordained you, you would certainly not have any need for a piece of paper from some religious organization. That may be correct in the religious meaning of the term ordination, however it is usually not sufficient for society. Yes, you can have “the calling” and be filled with the Spirit and be able to do all of the duties of a minister. Our society expects ministers to have the approval of some religious organization. Remember while it may not be the law, it is the expectation, just as it is for those practicing medicine and the law.

The Universal Life Church realized this almost fifty years ago when it made the decision to ordain all who ask, without questions as to beliefs and for free.

We trust that this discourse will help you to have a clearer understanding of ordination and your responsibilities as an ordained minister. Invest in the Zondervan books, and you will be ready to begin your life giving and helping others both in their times of need and joy.