Ordination is a both a legal standing and status and can also be a rite that an established religious outfit performs and establishes, recognizing an individual person for having completed his requirements to begin a ministry. Given the rise and overwhelming success of the Internet in so many other aspects of our lives, online ordination is a recent concept that has gained rapidly in popularity over the past decade. The legality of the online ordination process has been questioned by individuals and challenged in the courts, giving rise to its present status as a viable and wholly legal means of ordaining persons for ministry service.

The ministries that sanction online ordination do so on the basis of what they feel ordination is and is intended to be in the first place. They claim that ordination is the personal calling of an individual, by God, to enter into the ministry, usually in a church leadership role capacity. Because they say that God, and not any man or organization, directs people to go into ministry, they insist that online ordination is just as appropriate as any other form of ordination and is a recognized practice of freedom of religion.

The legal fact is that the United States government does not legally control ordination whatsoever because of the Freedom of Religion clause in the Bill of Rights, also known as the First Amendment, which reads in whole:

Congress shall make no law respecting an establishment of religion, or prohibiting the free exercise thereof; or abridging the freedom of speech, or of the press; or the right of the people peaceably to assemble, and to petition the Government for a redress of grievances.

Instead, ministries and churches are permitted to make their own determinations on who they will or will not ordain into a given ministry. Because of this fact, individuals who are accepted for online ordination by a recognized ministry will be as legally ordained as a person who is ordained via a process of physical seminary graduation and in person ordination by a church governing council. This is to say that the law does not, nor can they recognize any difference between an online ordination and other kinds of ordinations.

It was in this year that an American marriage ministries known as the Universal Life Church (ULC) sued the United States Federal Government (in a case known as "The Universal Life Church, Inc. v. The United States of America") as a response to an Internal Revenue Service initiated challenge on the ULC's tax exempt status. The ULC proves to be a non-denominational and non-traditional church. The court eventually ruled in favor of the ULC church. Although this ULC does not turn out to be a Christian outfit, its victory and the resulting ruling lent great support to the mainstream Christian church in America. Relevant portions of the 1974 court ruling are excerpted below, as follows:

"Certainly the ordination of ministers and the chartering of churches are accepted activities of religious organizations... The fact that the plaintiff distributed ministers' credentials and Honorary Doctor of Divinity certificates is of no moment. Such activity may be analogized to mass conversions at a typical revival or religious crusade."

Next follows the portion of the ruling that assures the legal acceptance of an online ordination: "Neither this Court, nor any branch of this Government, will consider the merits or fallacies of a religion. Nor will the Court compare the beliefs, dogmas, and practices of a newly organized religion with those of an older, more established religion. Nor will the Court praise or condemn a religion, however excellent or fanatical or preposterous it may seem. WERE THE COURT TO DO SO, IT WOULD IMPINGE UPON THE GUARANTEES OF THE FIRST AMENDMENT."

Ministers who have been ordained online are allowed to register themselves with a local county authority to perform wedding ceremonies. They are similarly able to offer their ordination certificate to the Internal Revenue Service in order to obtain tax exempt status for their ministry. So far as the government branches are concerned, an online ordination is legal and binding.

In order to legally prove that persons are officially and legally ordained, they will require certain papers for appropriate documentation. Although there are some differences and variations from one organization's ordination paper work to another organization's, they ought to all demonstrate the following common characteristics: 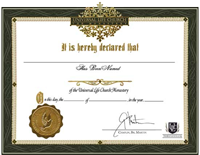 As a word of caution, people pursuing legally valid online ordinations should watch out for either documents that are downloaded off of the Internet, or those that are sent as emails or even email attachments.

There is always the possibility that a clerk in a small, backwater, provincial county might attempt to discriminate against a person who has received this kind of an ordination that was received through an online ordination process. In the event that this happens, the person who has been ordained online should endeavor to remind him or her that the United States Constitution affords the rights to everyone of the free exercise of religion and that the 1974 case from the Supreme Court still stands in effect. The 1974 court case can also be printed out and placed before such an official. Facing the weight of this amount and form of evidence and argument, the official is likely to back down and relent most every time.

In the end, the government values these properly documented online ordinations equally with traditionally organized church denomination ordinations. Therefore, questions of the legality of online ordinations are not what most people are after when this subject is brought up for consideration and debate. What these persons are instead asking is will an online ordination be accepted by others and established church organizations?

The answer to this question about peer and organizational acceptance of online ordination may disappoint some readers. The fact remains that the majority of Christian organizations maintain their own proprietary requirements for ordination. That said, they do not typically recognize other organizations' issued ordinations but that is true of other, established historically represented religions as well. This is not a hard and fast rule, as every organization makes its own decisions in this regard.

An important side-note is that denominational affiliation is not necessary for a person to become an ordained minister. As the legal precedent above established, all ordinations issued by legally recognized religious organizations are equally valid in the eyes of the government and the law. No organization's rules can change this fact.