The Benefits of Online Ordination 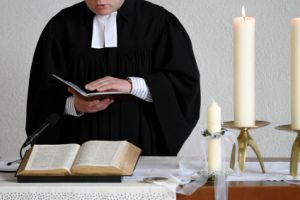 Weddings officiated by ministers ordained online are a highly popular topic here on the ULC Monastery blog, but many prospective ministers are still left with questions about how to carry out their sacerdotal duties from a legal perspective. Others are unaware of the benefits that such weddings offer friends, family, and other loved ones. The occasional anecdote helps illustrate how legal officiation by clerics ordained online works, and also how it makes a difference in the lives of bride and groom.

One such clergy member is Anna-Megan Raley, a weblog writer for the Houston Chronicle who was recently ordained online by her close friend, Jessica Alexander, and Alexander's mother. Alexander wanted to have a nontraditional wedding ceremony with as much involvement of friends and family as possible, so choosing Raley as her officiating minister was only a natural step in that direction. Interestingly, Raley not only presided over the ceremony itself, but also performed the function of bridesmaid, and even helped out with the decorations for the reception.

Alexander's concern over who did the officiating mirrors that of many modern-day couples. She wanted to find a wedding officiant she knew to bring together her and her husband in holy matrimony, not some stranger just because that stranger has undergone minister training in divinity school and earned a traditional ministerial credential. There is good reasoning behind this particular perspective. Judges, attorneys general, and other officials who have ruled against the legality of weddings performed by ministers ordained online have in the past argued that such weddings show irreverence for the solemnity of the institution of marriage. But who really shows irreverence? Total strangers can legally get married to each other /by yet another total stranger as long as they have the right set of chromosomes and $50 to give the city clerk for a legal marriage certificate the two do not even have to love each other. Meanwhile, weddings performed by ministers ordained online are intended to make the even personally relevant and meaningful by involving individuals who actually care deeply for the union they are presiding over. So, one has to ask oneself: who is really being irreverent?

But how to integrate loved ones into the wedding ritual is not the only thing on prospective ministers' minds; they are also worried about the legality of online ordination. Exactly how legitimate are marriages performed by ministers ordained in online churches? Online ordinations in internet churches are generally recognized in most U.S. states, although laws pertaining to how such ordinations are recognized vary, as Monica Rohr of the Associated Press notes:

Prospective brides and grooms should look into the Web site and local marriage laws, however, to make sure the ceremony would be valid. Although online ordinations generally are recognized, laws vary from state to state, sometimes from county to county. Some states require ministers to register after they are ordained. In Louisiana, parishes ask for a letter of good standing from the church, while Las Vegas requires a four-page application and background check.

Despite this progress, traditionally there has been a struggle to have the ordinations of ministers in such churches legally recognized; occasionally, however, it still presents itself as a problem, as in Virginia and Washington, DC. The Religious Freedom Restoration Act, enacted by the United States Congress in 1993, is one tool such churches have used to protect ministers' sacerdotal rights.

And why not get ordained online? It is surprisingly easy, after all, as Rohr points out in her story about Raley and Alexander: "Getting ordained requires little more than finding an online ministry that performs ordinations, and filling out a form with your name and address. Some Web sites require a nominal fee for paperwork; others don't charge anything." Some people are still uncomfortable with the idea of making it so easy and simple to become a clergy member or reverend for the purpose of celebrating the sacrament of marriage. However, it is hard to see why the right to perform such a rule should require formal, rigorous theological training if the heart and intention of the wedding officiant are in the right place. Besides, is spiritual insight not accessible to all based simply on a heartfelt desire?

Needless to say, nondenominational online churches such as ULC Monastery believe ordination rights should be enjoyed by anybody with a sincere desire to pursue spiritual knowledge and to recognize the loving unions of couples using that knowledge. We invite our ministers to share their thoughts. Have you struggled in performing your duties as minister since becoming ordained, or has it been a positive life-changing experience?