Entitlement or authorization means that an individual is either entitled or authorized to perform the solemnization of marriages by the ordaining entity and the respective state according to its state law. 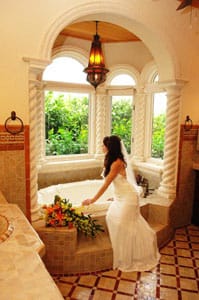 Each state has laws which grant "state authorization or entitlement" to individuals to solemnize marriages within its borders. States usually establish a broad category of individuals authorized to solemnize marriages. The states leave most of the designation to the ordaining entity, church, denomination or religious organization. Each state has its own guidelines and each minister is responsible for knowing the law in each state in which he/she intends to officiate marriages. You can read the requirements for the state you plan to perform a marriage in by reading the appropriate state law page.

Providing additional documentation for ministers is a costly and time consuming responsibility for the church, and additional documentation is not provided to everyone. Many times ministers want something personalized to them to make them feel validated or feel more "real" or legal. This is pure ego and nothing else. The church could not possibly satisfy the ego drives of its millions of ordained ministers; there simply is not the time or financial resources so it is not done. In time, ministers realize that credentials are just ego issues and true ordination is of the heart. We recognize that ego has its place and is necessary for everyone, but the church cannot invest financial resources in providing individualized documentation to everyone for personal uses.

The "illegal solemnization of a marriage" is a crime in most states and the charge can be brought for many reasons such as age of the individuals involved, failure to secure a valid marriage license by the couple, or failure of the minister to comply with state law such as it may be. The charge may be civil or criminal depending upon the circumstances and the established intent. Ministers attempting to circumvent immigration laws through the solemnization of marriages for foreign nationals can be prosecuted criminally. The church advises its ministers to not engage in or have anything to do with such activities. Ministers are advised to solemnize marriages only when presented with a valid state issued license and that the marriage license is not expired. (Handfasting ceremonies are not legal marriages so ULC ministers are advised to not call such ceremonies marriages.)

Marriages are legal contracts and each state has both a valid and vested interest in the proper "contracting" of the marriage bonds. This is a serious legal action and not to be taken lightly. Surely there are love interests of the most sacred type, but there are civil issues that involve liability, entitlement, responsibility and the establishment of a line of decent within the newly formed family. Most ministers that actively conduct marriage ceremonies are covered by their employment by a local church or denomination for errors they may make. Few ministers actually carry insurance liability for malfeasance, misfeasance or nonfeasance. What those terms mean are:

Conducting a marriage is a once in a lifetime event and cannot be redone. If a minister fails to perform there is financial liability that may attach so it is vital that the minister feel comfortable with his/her abilities prior to accepting a request to solemnize a marriage.

If the minister is certain of his/her authorization and entitlement by both the church and the state, then that individual may accept requests with self assurance that the ceremony will be performed with honor, respect, and dignity. 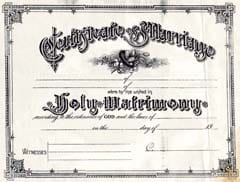 The minister should invest a period of time to meet the couple and to share ideas as to what the ceremony may be like. Couples often wish to make their own vows and this is to be encouraged. There are NO MAGIC WORDS. The meaning of the vows is different for each couple. The standard..."Do you take... I Do" is sufficient for the law, but it does not make for a memorable event although it may for some couples. A simple Do You, I Do ceremony would be termed a "civil" ceremony. Invoking God or religious issues would be termed a "religious" ceremony. Both are equally legal and valid.

The minister should have several vows to present to the couple so that a choice can be made, some of which we have outlines of on our wedding vows page. Oftentimes the location of the ceremony will have some impact on the choice and length of the ceremony. Whether the ceremony is to be conducted in a church, hall or correctional facility it is the minister's responsibility to handle all of the necessary requirements such as being presented with a valid state issued marriage license and to perhaps secure permissions from correctional staff for any special privileges as there may be need of. The minister is to maintain the solemnity of the situation and to conduct the ceremony with respect and honor.

After the ceremony, it is the minister’s vital responsibility to mail the completed marriage license to the appropriate state or county office. The minister should determine the state or county office and address to which it must be mailed in consultation with the couple. Many states impose a time requirement upon the minister for the mailing of the completed marriage license. THIS IS OF THE HIGHEST IMPORTANCE. The minister must never allow the completed license to leave his/her personal possession, and he/she is the only person who can mail in the license. It is an excellent professional practice for a minister to photocopy the completed license for his/her professional journal. In the case of a license being lost in the mail a photocopy would be of the greatest importance. These types of situations do arise, and a professional minister always maintains a journal of his/her ministerial activities.

It is crucial that you follow the instructions regarding when, how, and where to file the completed (witnessed, and signed by you) marriage license after the ceremony. Should you fail to properly record an executed marriage license/certificate, several actions may result, including but not limited to:

If you have any questions about when, where and how to have a marriage license recorded, please contact the clerk where the license was issued for details.

A suggested outline of activities is shown below: