Performing a Modern Wedding: Religious, Traditional or Something Else Entirely

Everywhere one looks these days there is something to do with marriage, a bride and or a wedding. From giant billboards advertising everything from perfume to vacations to television shows capitalizing on the drama and emotions of a wedding, a bridal gown seems to be one of the most popular symbols in today’s consumer culture. When it comes to wedding ceremonies themselves, however, things are not nearly as straightforward as the mass media would have us believe. There are almost as many different ways of getting married as there are couples, and anyone officiating over a wedding has their work cut out for them in determining exactly what will be expected from the bride and groom—well, mostly the bride—during the ceremony. The list of questions that must be asked is extensive, and the list of possible answers to these questions and their variations is endless. 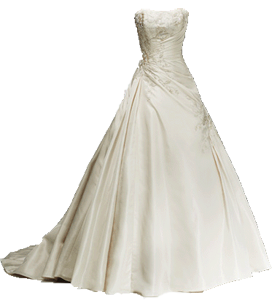 One of the major issues is whether or not the religious ceremony will be of a Christian faith practice, Jewish traditional, Islamic, Buddhist, Hindu, Pagan, Druid or perhaps non-religious/secular. In many countries, the term “religious” when used in reference to a wedding ceremony typically means a traditional Christian wedding, which is also the basis for many non-religious but “traditional” weddings. The Bible does not actually detail any of the elements or customs of a Christian wedding and early Christian weddings were almost certainly nothing like modern ceremonies, but the roots of many wedding traditions extend back to ancient times. Common elements of the ceremony include the processional, with the seating of the parents of the bride and groom, followed by the entrance of a minister, priest, rabbi or monk, and the groom. The bride then begins her walk down the aisle, accompanied by her father and preceded by a flower girl or boy who spreads petals for the bride to walk on.

Christian weddings typically include some opening prayers and the reading of some Bible verses before the joining of the bride and groom. Again, however, there is no mention of which verses to use in the Bible or any other text, leaving those wishing to have a Christian wedding a fair amount of latitude in choosing the verses and prayers that suit them best. In addition, the more secular trappings of the ceremony are also chosen with attention to the religious sanctity of the occasion. There are several pieces of classical music, for instance, that while again not dictated by any sort of religious doctrine are commonly used in wedding ceremonies. Some commonly heard pieces of music at weddings include Pachelbel's Canon in D, Bach’s “Jesus, Joy of Man’s Desiring,” and several works by Handel. We offer in our Church Store our version of wedding music. Of course, Wagner’s “Bridal Chorus” (“Here Comes the Bride”) and Mendelssohn’s “Wedding March” are also very popular choices for the processional and the recessional, respectively.

Many of these elements also appear in non-religious yet traditional ceremonies, but there are also completely non-traditional wedding ceremonies. These ceremonies need foremost to reflect the desires and lifestyle of the bride and groom but should also take into account the feeling of both families and friends as well. Many family members still expect certain recognizable elements of a traditional wedding and it can be up to the person performing the ceremony to attempt to make everyone happy.  In non-traditional ceremonies, however, it can be difficult to know exactly what this is. The most important job is to foster the feelings of love and community that all weddings embody.