Ordained ministers can officiate marriages for friends, family, and others. Some ministers get ordained to do it once, and some find their calling in a lifetime of performing the sacraments of marriage. They open up wedding businesses as marriage ministers and solemnize marriages as their occupation.

The Universal Life Church makes the process of performing weddings simple. We ordain individuals without question as to beliefs, and free of charge. Become an online ordained minister by completing our online form. 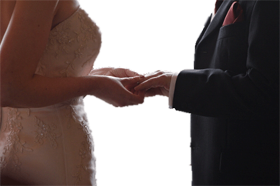 Upon becoming ordained, you will be able to administer traditional wedding vows. This is the official authorization and entitlement granted to all ULC ministers.

Each State Has Wedding Laws

Each state has wedding laws that grant "state authorization or entitlement" to individuals to solemnize marriages within its borders. States usually establish a broad category of individuals authorized to solemnize marriages. The states leave most of the designation to the ordaining entity, church, denomination or religious organization. Each state has its own guidelines and each minister is responsible for knowing the state law in which he/she intends to officiate marriages. We can help you navigate through some of the key issues in this area.

Read our Guide to Performing a Wedding.