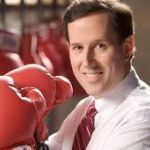 In his campaign for the U.S. presidency, ultra-conservative, right-wing Pennsylvania senator Rick Santorum has stepped up his appeal to the public's religious sentiments by attacking former president John F. Kennedy's belief that state and church should remain separate. If Santorum wins, the implications are ominous. When we look at the origins of the concept of civil government in the United States, it begins to look as though the senator is trying to take the country even further back in time than first imagined.

If Santorum is really trying to take us back in time, we have to go back at least to 1960. That year, during his presidential campaign, Kennedy made his thoughts on church-state separation known in a speech before the Houston Ministerial Association. We might be gobsmacked to compare the views of the senator from Pennsylvania with those of the assassinated president:

I believe in an America where the separation of church and state is absolute; where no Catholic prelate would tell the President -- should he be Catholic -- how to act, and no Protestant minister would tell his parishioners for whom to vote; where no church or church school is granted any public funds or political preference, and where no man is denied public office merely because his religion differs from the President who might appoint him, or the people who might elect him. 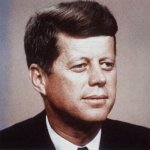 Kennedy, a Catholic, even went on to say that if issues such as birth control (he literally mentions birth control) came before him as president, he would make his decision in accordance with this and other separatist views. And he pronounced these words before a crowd of both Catholics and Protestants--before a crowd of ministers. Anybody who reads or listens to the entire speech will agree that the man's rhetorical skills far surpass those of today's presidents, and that his views reflect a far more openly liberal position than any president today would hold. What does Santorum think about Kennedy's speech? According to Peter Foster and Jon Swaine of The Daily Telegraph, Santorum responded to the first line of the above quotation by saying "You bet that makes you throw up."

Not exactly a comparison of oratorical skills in terms of either class or eloquence. On one hand we get polished, inspired public speaking which respects the intelligence of the listener, and on the other we get, "Ew, that kind of speech makes me barf!" Have we descended so low in our expectations that our presidential candidates must insult a widely cherished idea which lies at the foundation of modern civil government by evoking images of bile lining the inside of a toilet bowl?

As it turns out, Santorum's crudely sophomoric and deceptive rhetoric takes the American psyche back even further than 1960. Kennedy's words echo those of Thomas Jefferson himself, who expressed a similar suspicion of religious influence in government one hundred and fifty-eight years earlier in his 1802 reply to a letter from the Danbury Baptists, who expressed concern over being marginalized as a minority by the official Congregationalist Protestant church in Connecticut. In his letter, Jefferson sympathized with the Danbury Baptists:

Believing with you that religion is a matter which lies solely between man and his god, that he owes account to none other for his faith or his worship, that the legitimate powers of government reach actions only, and not opinions, I contemplate with sovereign reverence that act of the whole American people which declared that their "legislature" should "make no law respecting an establishment of religion, or prohibiting the free exercise thereof," thus building a wall of separation between church and State. Adhering to this expression of the supreme will of the nation in behalf of the rights of conscience, I shall see with sincere satisfaction the progress of those sentiments which tend to restore to man all his natural rights, convinced he has no natural right in opposition to his social duties. 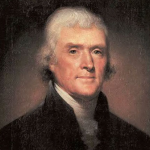 Just as it was for Kennedy, religion was a private and personal matter for Jefferson, who, during his tenure as ambassador to France, influenced Madison's drafting of the Bill of Rights and, specifically, the Establishment Clause and Free Exercise Clause of the First Amendment to the United States Constitution. Santorum's theocratic rightism is so retrogressive that the politicians of centuries past begin to look more modern and liberal than he. The truly unsettling thing, however, is that they would probably never win against him in a modern-day election, because past ideas regarding secularism are too liberal for the present day.

But Santorum would take the American public even further back in time than 1791, when the First Amendment came into effect, all the way to 1644. He would have to do so, because Jefferson borrowed his words from Roger Williams, a Baptist minister and the founder of Rhode Island, who also maintained that the separation of church and state was necessary to preserve the purity of both entities. Rev. Williams describes his views in his 1644 book The Bloudy Tenent of Persecution for Cause of Conscience:

...the faithful labors of many witnesses of Jesus Christ, existing in the world, abundantly proving, that the Church of the Jews under the Old Testament in the type and the Church of the Christians under the New Testament in the anti-type, were both SEPARATE from the world;
and that when they have opened a gap in the HEDGE, or WALL OF SEPARATION, between the garden of the Church and the wilderness of the world, God hath ever broken down the WALL itself, removed the candlestick, and made his garden a wilderness, as at this day.
And that therefore if He will ever please to restore His garden and paradise again, it must of necessity be WALLED in peculiarly unto Himself from the world, and that all that shall be saved out of the world are to be transplanted out of the wilderness of the world and added unto His Church or garden a SEPARATION of Holy from unHoly, penitent from impenitent, Godly from unGodly. [sic] 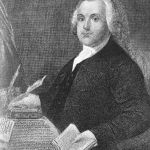 Here Williams attempts to vindicate church-state separation by alluding to the metaphor in Isaiah 5:1-7. In Williams's view, formal separation of the two is necessary to preserve the purity and prevent the corruption of both. The government of the world must not impose on the vineyard of religion, lest it should sour the grapes within, and religion must not impose on government lest it should violate the right to freedom of conscience granted by God 1, including that of non-Christians such as Jews, Muslims, pagans, and atheists 2. It is impossible to imagine Santorum making such a strong case for church-state separation today in 2012.

Of course, right-wing revisionists have attempted to discredit Williams's interpretation--but not necessarily with any success. In an article on the Web site The Moral Liberal, conservative writer and former evangelical pastor William J. Federer argues that Williams is alluding to "a Scriptural pattern that when God's people sin, He judges them by allowing the church to be trampled by an ungodly government". The message behind the Isaiah passage, Federer suggests, is that God will restore his garden by shutting it out from the world if his followers repent. It is unclear exactly what Federer means here, but if he is saying "religion should be allowed to influence government, because the Isaiah passage doesn't actually bar it from doing so", his logic is flawed: 1) God's breaking down the wall is a punishment for sin in the passage, not the ideal state of things, hence it follows that walling off the garden from the world (i.e. separating church and state) is a benevolent gift from God in recognition of human penitence. 2) Federer's argument is a genetic fallacy, which states that a conclusion is valid because of its origin rather than its current meaning or context (e.g. saying that engagement rings are sexist because they used to symbolize the ankle chains of enslaved wives, even though they don't anymore). Even if the original Isaiah metaphor wasn't intended to support Williams's idea of church-state separation, it has adopted a new meaning and purpose, therefore it stands on its own merit, and for its own sake.

But you'll never hear Santorum make such an argument. Comparing him with Kennedy, Jefferson, and even Williams, it begins to look as though the senator intends to transport America all the way back to the Middle Ages. With any luck, the public will become so fed-up with his red herrings, logical leaps, and puerile antics that they'll say, "Enough. We refuse to let you co-opt our civil government to impose your religious ideology on us". This is certainly the hope of the Universal Life Church Monastery. Like other nondenominational churches, the ULC Monastery has always believed in strict church-state separation and government neutrality in religious affairs, to prevent corruption on both sides of "the wall" and to protect all faith groups (including non-faith groups), for we are all children of the same universe.