Bronze-Age Sexism in the Modern-Day Church

You're sitting in the pew at church, listening to the pastor give a sermon on the proper relationship between wives and husbands. He (although he could be a she) quotes Ephesians 5:22-3, and immediately your ears prick up. Your pulse quickens and your skin becomes flush with indignation. Few verses in the Bible have ever rankled you so much as that one, except perhaps the various allowances for slavery sprinkled throughout the Bible, as well as injunctions to execute adulterers, homosexuals, and other "miscreants". It is one reason you decided to become a minister in a nondenominational Internet church. But this kind of preaching isn't taking place in some small nineteenth-century Victorian parish church--it's happening now in the twenty-first century, and something needs to be done to stop it.

The model of "Christianity as masculinity" has developed into a sort of religious trend of late, as if to counteract rapid social changes in gender and sexual identity. The movement's most high-profile figures include people like John Piper, Mark Driscoll, Al Mohler, Wayne Grudem, and, of course, James Dobson. In a recent blog entry, author Rachel Held Evans describes Piper's belief that Christianity should have a "masculine feel", while anthropology professor Jenell Paris, a contributor at Patheos, mentions Driscoll's remarks that women should stay up late at night to prevent men from cheating, and that stay-at-home fathers are worse than unbelievers. By now the average ULC minister will probably be incensed. But it gets worse. Contributor Jasdye at the blog Left Cheek writes about Piper's recommendation to women who are beaten by their husbands: do not leave immediately and seek help, but stay with your husband for the night and wait until the church opens later in the week to seek advice on how to act.

Pretty odious stuff. But it's so gross and awful nowadays that even some men are finding themselves speaking up against the insidiously sugar-coated "Masculine Christianity" movement (if it can be called that). And so should they, because feminism is basically about advocating sex equality, and this is mens' responsibility as much as women's. In response to Piper's claim that "God has given Christianity a masculine feel", Jasdye writes,

I'm not sure what that means, "masculine feel." I know that I'm a man, and that there is something good about that, as I--as a male--was made in God's image. But women are also made in God's image. So is my precious daughter. And they're feminine, right? So does Christianity have a feminine feel as well?

This is exactly what men and women, including ministers ordained online, should be saying in response to statements like Piper's. Christianity should not be defined as masculine, because men and women both have equal access to divine wisdom, and men do not make better leaders than women. But we should also avoid confusing male with masculine, and female with feminine, because some men are feminine, and some women are masculine. Rather, we should be stating that Christianity (or any religion for that matter) should have an equal influence of male and female. Comparing South African Apartheid with gender apartheid in the church, another man, Fred Clark of the Patheos blog Slacktivist,also denounces the benevolent pop-sexism of Christian churches:

The South African system of racial apartheid made that nation a pariah state. It was almost universally denounced as immoral, because it was immoral. And that's just as true of the gender apartheid in the church. It is immoral. It is indefensible. It is a sin a sin that has become entrenched in institutional structures.

Now some opponents of women in church leadership positions will argue that racism cannot be compared with sexism. Well, yes it can. Both are forms of discrimination on the basis of a personal characteristic that has no bearing on leadership ability. And just as one can argue that the Bible commands wives to submit to their husbands, one can also argue that God is blind to race and sex (Galatians 3:28). Of course, this creates a contradiction, so when push comes to shove, which doctrine should we accept? If we want to be fair, gender-blindness makes more sense. We don't get ordained online to divide and discriminate. This is the approach taken by Nobel Peace Prize laureate Desmond Tutu, another man who has criticized Christianity for excluding women. Tutu announced at a gathering of the world's political and financial élite in Davos, Switzerland that the world needs a revolution of women, and that women should have a more significant role in policy-making in the world's power structures.

The pop-sexism trend is by no means limited to Abrahamic religions, however. Some forms of New Age and neopagan spirituality also preserve a hierarchical male-female binary rooted in sex stereotypes. In an attempt to be fair and equal, they teach that there is a male deity and a female deity (the god and the goddess), but the god is still associated with traditionally masculine traits such as reason, dominance, and discipline, while the goddess (who embodies the "divine feminine") is associated with traditionally feminine traits such as intuition, submissiveness, and nurturance. By definition, the submissive goddess is subordinate to the dominant god. But that's hardly fair and equal, so the divine feminine still doesn't cut it. 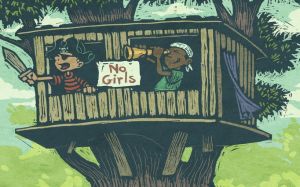 In an attempt to justify all of these old-fashioned sex roles, proponents of "masculine Christianity" will inevitably play the biology card (yet conveniently disregard it when it supports the theory of evolution). God made males dominant and disciplinarian, and females, submissive and nurturing, they will say. But there are lots of problems with this assumption. A lot of the "scientific" data cited to justify this biologically determined sex inequality is methodologically flawed, over-interpreted, or simply non-existent, as psychologist Cordelia Fine reveals in her book Delusions of Gender: How Our Minds, Society, and Neurosexism Create Difference. One of the observations she makes in the book is that women are not necessarily more nurturing or domestic than males, and that men are not necessarily more fit than women for positions of leadership, power, and prestige. But the pigheaded sexist doesn't care about real evidence; he or she will simply shout louder the second time around in hopes of drowning out the facts.

Proponents of "masculine Christianity" are riding this wave of pop-psychological pseudoscience and exploiting it to their benefit. Science is convenient to the traditionalist when it reinforces his or her bias, but sorely inconvenient when it challenges that bias. So how should we confront this disturbing trend in popular, right-wing, evangelical Christianity? Jenell Paris suggests we take the steam out of it by ignoring it: by refusing to purchase products like books which promote it, be refusing to attack it in the media (on blogs, in newspaper op-eds, etc.), and even by refusing to "like" somebody else's dislike of it on social network sites. For, as the Bible says, you should not throw pearls before swine. Paris does make an exception for cases in which a direct, practical difference can be made, however. Whatever we do, we shouldn't be telling ourselves that the Evangelical Church in America is too "feminine" (whatever that's supposed to be); we should be telling ourselves that it is too chauvinistic. We at the ULC Monastery hope that this will change, because we believe strongly in the equality of women and men in positions of leadership and authority in the church and in the ministry. For, after all, we are all children of the same universe.

Patheos: "Memo to the Masses: Withhold Consent from Christian Sexism"

Patheos: Slacktivist: "Gender Apartheid in the Body of Christ"