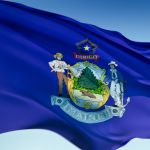 A district court in Maine has released an internal document from the National Organization for Marriage (NOM) outlining the group's strategy for fighting marriage equality. According to the document, the group's goal is to pit blacks and Latinos against the gay community to fracture the Democratic base. Needless to say, this sort of callow subterfuge is contrary to everything the ULC Monastery stands for, which is bringing together people of different backgrounds.

The report was released during court proceedings on 26 March as part of an investigation by the state of Maine into NOM's 2008 to 2009 campaign finance strategy. The Human Rights Campaign has got a hold of the document and circulated it around the Internet, revealing NOM's shockingly underhanded approach to preventing ordained ministers and wedding officiants from solemnizing civil same-sex marriages. The anti-gay group has played an instrumental role in funding efforts at repealing gay marriage legislation: in 2009, the Maine legislature legalized same-sex marriage, but the law was repealed by Maine voters through a referendum the same year.

The language used in the report is unabashedly blunt and calculating. The group's goal is to "drive a wedge between gays and blacks--two key Democratic constituencies", "provoke the gay marriage base", fan "hostility", and "find attractive young black Democrats to challenge white gay marriage advocates electorally". It also seeks to pit Latinos against gays, asking, "[w]ill the process of assimilation to the dominant Anglo culture lead Hispanics to abandon traditional family values?" and declaring, "[w]e must interrupt this process of assimilation by making support for marriage a key badge of Latino identity--a symbol of resistance to inappropriate assimilation". In short, the group's goal has been to create discord among Democratic constituencies and thereby force Democrats to steer clear of the controversy. 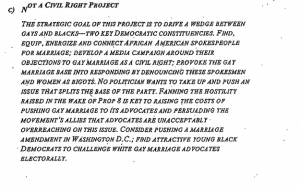 But all of this strategizing stems from prejudice. The group assumes that the Latino and African-American communities are inherently anti-gay, and white Anglo culture, perverse, but this assumption is highly questionable. Several Latino-dominant nations, including Spain, Argentina, and Mexico, have passed marriage equality legislation at either the local or national levels, so obviously Latino culture is not inherently anti-gay; meanwhile, the NAACP has officially endorsed marriage equality. In fact, the late Coretta Scott King, widow of Martin Luther King, Jr., also endorsed it. So African-American culture isn't inherently anti-gay, either. But perhaps NOM's strategy is to brainwash these groups into believing the opposite about themselves.

If Jesus Christ came back to set the record straight, he would probably start with NOM. But since he hasn't, the burden is on us. The Maine court's disclosure of NOM's campaign strategy document reveals the dark and insidious side of the organization, which is very un-Christian to say the least. This kind of social justice issue concerns ULC ministers of every stripe, black and white, gay and straight, male and female, and we should all be speaking out in solidarity against this injustice, for we are all children of the same universe.