Jesse Duplantis recently asked his followers for money to purchase a new $54 million private jet, explaining that God wanted him to have it. He later backtracked on those comments, saying that he just wants his followers to "believe" for the jet, not necessarily pay for it. However, given that he's still accepting money from followers (and since free jets don't tend to appear out of thin air), we're not so sure "believe" isn't a codeword for "donate."

Jesse Duplantis Ministries already owns three private jets. This would be the fourth. Why does he need another one? To better spread the gospel, of course. Oh, and in his words, regular commercial planes are known for carrying "demons." Yikes.

But Duplantis is far from the only prosperity gospel preacher. He's not even the first to wish for an airplane from his followers!

Back in 2015, the televangelist Creflo Dollar requested $60 million from his followers to buy a fancy jet. And Kenneth Copeland, another televangelist, just recently acquired his own plane a Gulfstream V paid for by donations from his flock. When pressed on the issue, these superstar pastors justify their lavish mode of travel by insisting they need private jets to effectively spread the word of God.

According to Copeland, the famous televangelist Oral Roberts suffered greatly on commercial flights: his spirit was "agitated" by other people on the plane who requested prayers. Apparently, such minor requests are too much for mega-pastors to handle. Better to get away from the needy masses that's what Jesus did, right?

Er, not exactly. Consider what the Bible says about how Jesus treated people. In the book of Mark, right before Jesus feeds 5,000 with 5 loaves of bread and 2 fish, it says:

"When Jesus landed and saw a large crowd, he had compassion on them, because they were like sheep without a shepherd. So he began teaching them many things."

By examining another comparison, one gets the idea that Jesus would not approve of preachers traveling on private luxury jets. When Jesus entered Jerusalem on what we now call Palm Sunday, he chose not to ride on a horse or a camel symbols of wealth and status but instead rode a lowly donkey, the animal of the masses.

There are many other instances in which Jesus talks about helping those who are less fortunate the Parable of the Good Samaritan being perhaps the most well-known. In the discourse with a ruler recorded in Luke 18, Jesus tells him to "sell everything you have and give to the poor" to have eternal life.

Jesus did acknowledge that money was needed to support the Lord's work, and also seemed to believe that it was right to pay taxes. In one parable, a man is praised for investing his resources to gain money. But in other scripture, believers are told to depend on God to meet essential family needs. We shouldn't hoard our resources but invest in the lives of others.

Jesus may not ride a donkey today, but it's debatable whether he would expect first-class travel accommodations to carry out his mission. The picture painted of Jesus in the Bible does not give the impression that he would expect to be lifted up and put ahead of others. 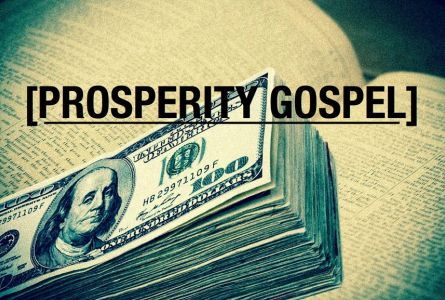 So where does that leave so-called "prosperity gospel" preachers like Jesse Duplantis and Ken Copeland? Are they truly doing the Lord's work by crowdfunding private jets and living in luxury? Or are they just putting on a "holy act" to squeeze money out of naïve followers?

If the prophecy of the Second Coming is fulfilled, one wonders what might happen to these prosperity preachers. When it's their turn to be judged by God, will they ascend to heaven? Or will they be left behind with the other "heathens"?

At least they could still travel in style.