On 23 January, at a packed Senate committee hearing in the Washington state Capitol in Olympia, the Legislature secured the last vote required to pass a pair of bills (House Bill 2516 and Senate Bill 6239) legalizing same-sex marriage in that state. There, Senator Mary Margaret Haugen (D-Camano Island) announced her support for the Senate bill, giving the deciding twenty-fifth vote needed for passage. The House already has majority support. Despite the optimistic outlook for gay marriage proponents in Washington, a host of right-wing conservative religious individuals and organizations are crawling out of the woodwork to fight the bills' passage.

It was uncertain whether Haugen, a moderate Democrat who chairs Washington State's Senate Transportation Committee and seldom deals with social issues, would vote in the spirit of the Senate bill's proponents, or that of its opponents. Her support became clear at the end of Monday's hearing when she gave a speech about trying to balance her personal religious beliefs with the rights of other Americans, deciding ultimately that it was wrong to impose those beliefs on others:

I have very strong Christian beliefs, and personally I have always said when I accepted the Lord, I became more tolerant of others. I stopped judging people and try to live by the Golden Rule. This is part of my decision. I do not believe it is my role to judge others, regardless of my personal beliefs. It's not always easy to do that. For me personally, I have always believed in traditional marriage between a man and a woman. That is what I believe, to this day.

But this issue isn't about just what I believe. It's about respecting others, including people who may believe differently than I. It's about whether everyone has the same opportunities for love and companionship and family and security that I have enjoyed.

For as long as I have been alive, living in my country has been about having the freedom to live according to our own personal and religious beliefs, and having people respect that freedom.

Not everyone will agree with my position. I understand and respect that. I also trust that people will remember that we need to respect each other's beliefs. All of us enjoy the benefits of being Americans, but none of us holds a monopoly on what it means to be an American. Ours is truly a big tent, and while the tent may grow and shrink according to the political winds of the day, it should never shrink when it comes to our rights as individuals.

Do I respect people who feel differently? Do I not feel they should have the right to do as they want? My beliefs dictate who I am and how I live, but I don't see where my believing marriage is between a man and a woman gives me the right to decide that for everyone else. 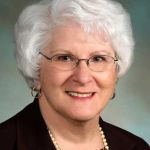 The rest of Haugen's speech can be read at The Capitol Record. It may not be a ringing endorsement for gay marriage or the modern wedding ceremony, but it is sufficient for LGBT people fighting for marriage equality. Haugen sounds like a woman struggling to decide how far to apply her personal religious beliefs to the lives of others, and how to integrate the more progressive values of much younger generations (she is 70) with those she grew up with. What is important is that deep down inside (as much as we can tell, at least), Haugen seems to realize that she cannot, in her right conscience, pick and choose which loving, consenting adult couples get to enjoy married life. It is probably an extremely hard decision to make for somebody whose life-long worldview has been shaped by the assumption that marriage is a union of one man and one woman. Those of us who support marriage equality should be grateful for her charity of spirit. She could have said "no".

Speaking of which, naturally, since this is all happening in the United States (although a case could be made that Washington is barely part of the U.S.), the bills have stoked the ire of some of the nation's most vociferously anti-gay priests, pastors, and other ordained ministers, as well as many anti-gay lobbies. The National Organization for Marriage has pledged to donate $250,000 to primary challenges against any Republican who backs the bill. Others include Rev. Josh Fuiten, pastor of the evangelical Cedar Park Assembly of God Church in Bothell, Wa., the Most Rev. J. Peter Sartain, Catholic Archbishop of Seattle, and Ken Hutcherson, pastor of Antioch Bible Church in Kirkland, Wa. To give people a taste of what Hutcherson is made of, in a recent ThinkProgress article, he said, "If I was in a drugstore and some guy opened the door for me, I'd rip his arm off and beat him with the wet end", apparently expressing his own understanding of "Christ-like" masculinity. In the same article, he also compared Washington state governor Christine Gregoire to John Wilkes Booth--Abraham Lincoln's assassin--for announcing her support for the bill. So, no, it's not a pretty bunch of knuckle-dragging troglodytes that await gay marriage supporters at the marriage equality battleground.

Some of these marriage equality opponents plan to fight the bills with a public vote on the issue. According to a Seattle Times article, they plan to file a referendum to place the issue on a ballot by November, but by state law Governor Christine Gregoire must sign the bills into law before they can do this. She has already promised to sign the bills into law when they reach her desk. No marriage equality bill put up to a public vote has ever been approved, but there is always a first time for everything: a study conducted by the University of Washington last October indicates that if a gay marriage referendum were put on a ballot in Washington state, 55% of voters would uphold marriage equality. Thus, it may not be so easy for people like our warm, friendly, Christ-like Ken Hutcherson to count on the will of the people to get his way, but it does signal hope for the bills' proponents.

Sen. Haugen's decision may have clinched the last vote necessary to legalize same-sex marriage in Washington state once and for all, but it is very possible that, once signed into law, the bills will be put up to a public vote through a referendum challenge spearheaded by religious conservatives. As mentioned, though, given recent findings on the growing acceptability of gay marriage, Washington state voters may be the first in the United States to uphold the law and support marriage equality for lesbian and gay people. We'll have to see. At any rate, it goes without saying that the Universal Life Church Monastery fully supports Washington state House Bill 2516 and Senate Bill 6239, since this legislation would protect, affirm, and respect the family and the institution of marriage, regardless of sex. Let's hope marriage equality becomes the highlight of 2012 for Washington state, and that those who get ordained online in the ULC will be able once and for all to legally officiate weddings for all loving couples, and to have each and every one of these recognized by the state.

The Seattle Times: Gay Marriage in Washington: Legislature Has the Votes