Things About the Catholic Church that TOTALLY Make Sense

A Lighthearted Look at the Foibles of the Catholic Church

Offended by the Catholic church's refusal to ordain women, guest blogger SJ White takes a scathing yet tongue-in-cheek look at the many questionable practices of the world's largest religious institution. 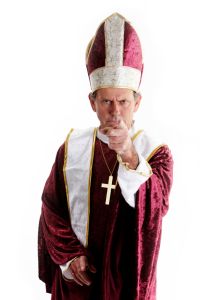 In light of the recent blog about the controversy surrounding the "Womenpriests" who were secretly ordained, I would like to present to you my defense of all things Catholic through the following list, which I have entitled, "Top 10 Things About the Catholic Church that TOTALLY Make Sense."

Let's start off by addressing an issue that has already been raised (and indeed sparked the creation of this response): Womenpriests. In addition to the adoption of a phonetically displeasing name for these radical women, the Catholic Church is looking for any way to undermine, insult and take them down. Women are incapable of being ordained because the Holy Spirit says so. And there's no room for compromise when dealing with an intangible being.

Because Latin is alive and well. And there's no way you're going to succeed in the real world without it. Also, God speaks Latin better than any other language, so if you really want Him to hear you, you better know how to communicate effectively. It is especially important for impressionable children to learn how to do a Latin Mass, because if they do not, they will not know how to be good Catholics. Intellegitis?

Being that there are only 1.67 billion Catholics in the world, it is super important that there be no "roadblocks" for the creation of more Catholics. You think that just because approximately of the world's population is Catholic means that they're going to be on top forever? Please. Plus, because no Catholics ever have sex outside of marriage, there is no need to protect against STDs or other diseases, meaning that birth control is really just a propogandic ploy by the government to control people. And we all know that if there's one entity that thrives on being in control of people, it's the Catholic Church.

While it may seem like this whole "gay" thing might be catching on, the Catholic Church is pretty sure it's just a fad. It'll blow over pretty soon, just like racial discrimination and sexism did.

We know that muttering incantations to yourself and methodically touching touching a string of beads while going through a seemingly endless sequence of standing, kneeling and sitting may be an identifier of some kind of mental disorder in everyday life, but the Catholic Church pretty much chalks it up to something that people just do out of habit (and maybe fear). Like going to see Santa.

We all know that the format for picking a new Pope is almost identical to the NFL Draft. You've got your first round picks, your trades, the occasional free agent - usually that one black Bishop that no one has ever heard of. Other comparable factors: first round picks in the NFL Draft get mansions and the final pick in the Pope Draft gets the Vatican; everybody looks really awkward in their hats; and they only women who watch are those who were forced to be there either through bloodline or affiliation.

6. The Vatican (in general)

Sure there are millions of starving children all around the world, but check out that gold plating! So necessary!

Tired of having to trek all the way down to confession to absolve your sins? Don't want to say you're sorry for committing evils? Have a ton of money to blow and a blind devotion to the Catholic Church? Say no more! Introducing (drum roll, please) INDULGENCES! For just a few easy payments, you too can go to heaven. Enjoy the freedom to do whatever you want, whenever you want, to whomever you want, and pay for it later. But hurry! Only while supplies last (or people start catching on). Shipping and handling not included.

For those people who need assurance that someone is watching over their TV, guarding their library book and protecting their front lawn, the Catholic Church invented patron saints. It doesn't matter what needs guarding, chances are, there's a patron saint for that. Cause you can't watch over your ferret all the time! (Thanks, St. Frank)

No on really knows where the Catholics' obsession with plaid came from, but it is known that millions of school-aged children have been carelessly exposed to its dangers. The rest of the world is still working on a cure.