Same-Sex Marriage and the Illuminati 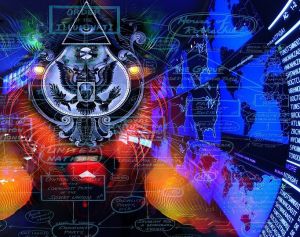 Supporters of same-sex marriage are like supporters of the Illuminati, according to evangelical television host Pat Robertson, who made the remarks in a recent episode of his program The 700 Club. The former Southern Baptist minister suggested the comparison while discussing the legalization of same-sex marriage in France. Even if Robertson's remarks were valid, it does not pose much of a problem for ordained ministers in the Universal Life Church, who seem to hold many of the same principles as this historically maligned group.

In an attempt to lend his comment an air of venerability, Robertson relies on a slightly misquoted admonition attributed to former British Prime Minister Winston Churchill, who famously said, "[t]hose who fail to learn from history are doomed to repeat it." For Robertson, the "crimes" of the Illuminati are being repeated in France and elsewhere:

It has been said that those who do not learn the lessons of history are doomed to live them again. To go back in history to the French Revolution, you find that there was a thrust spurred by the writing of a group called the Illuminati to destroy the family, to destroy the state, to destroy capitalism, to destroy the Church, and it was lived out in the blood of the French Revolution. Well, we have here the debate over same-sex marriage, but is it really just about marriage? Or does it go far beyond that, to destroying the traditional family and building a country without God?

In essence, he implies, the struggle to grant equal marriage rights to same-sex citizens equates with an assault on economic and religious freedom. Somehow, he manages to make a grand logical leap from legalizing a practice which conflicts with his beliefs to enforcing some anti-theistic agenda on Christians. But this is perhaps unsurprising, coming from Pat Robertson.

Reason and Equality VS Clandestine Manipulation

In reality, the Illuminati were probably a far cry from the frightening creature Robertson describes, and a group which some ministers ordained online might have admired. The original Bavarian Illuminati were a secret society founded in 1776 during the Age of Enlightenment to resist prejudice, superstition, political tyranny, and religious domination over public life, and to support gender equality and women's education. Ironically, it was the Bavarian government, in league with the Roman Catholic Church, which suppressed and outlawed the Illuminati, and the group eventually disbanded in 1785.

If this is the true portrait of the dreaded Illuminati, is it really such an insult or an omen of evil for Robertson to compare supporters of the Illuminati to supporters of same-sex marriage? For modern secular humanists, it seems hard to argue with fundamental principles like gender equality, political integrity, religious neutrality in the public sphere, and an appreciation of science and reason as a tool for the advancement of civilization. These are principles which many ULC ministers hold. Supporters of marriage equality seem a little less terrifying, then, if indeed this is the sort of milieu from which they derive their inspiration.

Robertson tries very hard to instill fear and apprehension in his viewers, but the link he creates between same-sex marriage proponents and the Illuminati is not as foreboding as he suggests. Perhaps what he is really trying to say is that he dislikes the sort of principles that Enlightenment thinkers, and hence same-sex marriage proponents, stand for, namely: reason, fairness, and equality. But for Universal Life Church clergy, these things are indispensable components of our character.