Women who dress like prostitutes deserve to be raped, according to a student minister who regularly preaches on the University of Arizona campus. As if to pour salt into an open wound, the student made the remarks just before a "Take Back the Night" event held on campus the night of Tuesday, 23 April, to raise awareness of sexual violence. Although nobody should make excuses for rape, it seems especially disheartening when such excuses are made by a member of the clergy whose duty is to look after the oppressed, persecuted, and underprivileged.

Dean Saxton, also known as Brother Dean Samuel, makes regular appearances on campus to give ad hoc church sermons on the school's Mall in front of Heritage Hill and the Administration building. For Tuesday's sermon, Saxton a third-year student of classics and religious studies voiced his discontent with the way many young women dress on campus. Holding up a sign that said "YOU DESERVE RAPE", he argued that women who dress immodestly should not be surprised if they are targeted as potential victims of sexual assault. "I think that girls that dress and act like it," Saxton said, "they should realize that they do have partial responsibility, because I believe that they're pretty much asking for it." He argued that "if you dress like a whore, act like a whore, you're probably going to get raped". The sermon also drew angry counter-protesters holding signs that said things like "YOU DESERVE GRAPE" and "Nobody deserves rape".

Almost immediately, the school's Dean of Students Office received piles of handwritten complaints, emails, and telephone calls about Saxton's sermon, according to Kendal White, interim Dean of Students. The fracas centered mostly on questions of free speech and student safety. White said Saxton's behavior did not violate the student code of conduct because his language was general enough that he was not targeting or threatening a particular individual. Additionally, while the Dean of Students Office finds the sermon "vulgar and vile", Saxton's words constitute "protected speech" under federal constitutional law, said White after a university attorney was contacted. 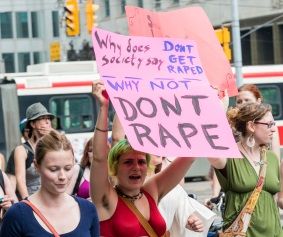 Saxton's willingness to suggest women deserve to be raped for the way they dress reflects the strong undercurrent of misogyny present in what has been widely termed "rape culture" a culture in which sexual assault is trivialized, minimized, tolerated, and even condoned. (The global movement Slut Walk has emerged as a counter-demonstration to these attitudes.) A common assumption among rape apologists is that the victim is partially responsible for being raped because she sends signals that she wants to be raped. The problem with this assumption, however, is that it is inherently illogical: it is impossible to want to be raped, because rape by definition means forcible or coercive sex, not consensual sex.

While Saxton technically enjoys the freedom to express his beliefs about rape, the Universal Life Church Monastery strongly condemns his message. It is the duty of ULC ministers and other ministers ordained online to defend victims of sexual violence and demand justice for perpetrators. Women do not mysteriously control men with their seductive "feminine wiles", and men do not lack control over their sexual impulses. The only person responsible for rape is the rapist, for it is the rapist, not the victim, who consciously chooses to rape.