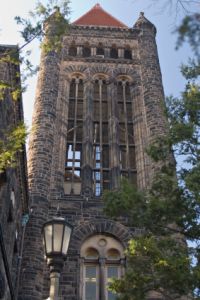 Religious studies are, to say the least, a very precarious discipline to navigate, especially when compared with the far more straightforward sciences; emotions often run high (especially among younger, more impetuous first-year students) over religious attitudes about sexual morality. Certainly this was the case when adjunct professor Kenneth Howell of the University of Illinois was fired for explaining to his class the theoretical views of the Roman Catholic Church on homosexuality. This case illustrates nothing more than an unfortunate misunderstanding between teacher and student, and the former's loss of a job as a consequence.

In preparation for an upcoming examination, Howell sent out an email to his students in which he discussed the philosophies of utilitarianism and natural law, and how these undergird much of the Catholic Church's stance on moral issues such as same-sex affection. It is the view of the Universal Church of the Holy See, as Howell attempted to convey, that homosexuality is incompatible with the self-evident tenets and principles of natural law. In the email, he explained that,

Natural Moral Law says that Morality must be a response to reality. In other words, sexual acts are only appropriate for people who are complementary, not the same. The explanation (not least because of the leap of logic it explains) did not go over well with all students, however, and one student, wishing to remain anonymous, persuaded a friend to email the head of the Department of Religion with a complaint over Howell's alleged denigration of homosexuality on philosophical grounds, and the accusation that his words constituted "hate speech". According to the Christian news magazine World, which serves as an online forum for Christian apologetics, the email complaint read that,

Teaching a student about the tenets of a religion is one thing. Declaring that homosexual acts violate the natural laws of man is another. The courses at this institution should be geared to contribute to the public discourse and promote independent thought; not limit one's worldview and ostracize people of a certain sexual orientation. Upon receiving the complaint, and as a consequence of the ensuing fracas, the University of Illinois reviewed the matter and, eventually, decided to formally terminate the professor's employment.

But, ironically, it was teach about the tenets of a religion, and not endorse them, that Howell did. He never said it was his position that "sexual acts are only appropriate for people who are complementary, not the same"; he said that it was the position of the Roman Catholic Church, on the grounds of natural law principles. Quite simply, the poor man never challenged the morality of homosexuality or same-sex relationships; he said that another group of people did so. Therefore it is quite impossible to convict him of hate speech. Unfortunately, for once he decided to forgo the convention of giving a disclaimer and stating explicitly "this is their view, not my own", but the context clearly suggests he is giving the Church's opinion on the matter, not his own.

Howell did not engage in hate speech; he merely explained in an objective manner the philosophical stance of a totally independent religious organization on a moral issue. As a professor of comparative religion and religious studies, it is his job to teach about what religious organizations teach, so we hope he gets his job back. Perhaps first-year university programs should place greater importance on semantics, logic, and basic reasoning skills. It might help students to grasp the concept of "voice", and to distinguish between personal opinions and reported speech, before they take the liberty of pointing fingers.