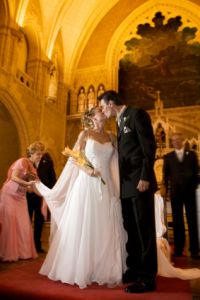 As discussed in recent articles here on the ULC Monastery blog, alternative wedding ceremonies have gradually increased in popularity in North America, but on the other side of the Atlantic, in Britain, there is a growing trend toward traditional religious weddings in churches, which the Church of England sees as a boon to its influence in the community. Rapidly declining church attendance in the United Kingdom has left many cathedrals virtually empty, but the centuries-old structures may be seeing a revival as wedding facilities for couples who look back nostalgically on their cultural heritage.

In fact, it is the English Church, through a campaign called the Weddings Project, that is spearheading the effort to lure Britain's brides and grooms back to Europe's old, crumbling cathedrals to celebrate the sacrament of marriage.

After Parliament reformed a law in 1995 allowing weddings to be held outside register offices, in places such as castles, hotels, and stately homes, the Church saw a decline in wedding numbers. According to The Telegraph's religious affairs correspondent Jonathan Wynne-Jones, "the number of such civil weddings rose to more than 50,000 a year, while the number of Church of England marriages fell by 40 per cent to about 55,000 a year". It was a bleak period for the already bleak, musty, withering official state church of England, which has seen the virtual disintegration of its congregations in a grimly post-industrial, cynical Britain.

Now, the Church has taken a number of unconventional steps in order to compete with civil weddings and show young couples how relevant and meaningful a traditional religious wedding can be. As Wynne-Jones reports, churches now provide newlyweds with feedback forms to fill out, allowing clergy to assess their own performance and improve their standards. The resemblance to job evaluations and university course evaluations is certainly noteworthy, suggesting a modern twist to the church's wedding operations. In addition, Wynne-Jones reports, bishops and vicars are now attending wedding shows where they hope to convince couples how down-to-earth the clergy are, and how accepting they are of modern-day atheists, agnostics, non-believers, and secularists seeking to tie the knot. Recently, the General Synod (the Church's parliament) made it easier for persons to wed in parishes where they have familial links.

So while many North Americans are responding to the poor economy by pinching their pennies and opting for quirky yet inexpensive alternative weddings, many Britons are nostalgically re-discovering their own backyard by embracing the glory of the cathedral wedding. But it is not without practical considerations. Most likely the Church would have failed had it not taken such an egalitarian, interactive approach to luring customers. What seems to be taking place in both Britain and North America is something akin to creative "crowdsourcing" in which the public play a role in imagining and creating the product to be consumed. Reflecting this trend, the English Church has been seeking out the creative insight of its own clients in order to re-create the traditional church wedding in a fresh, attractive light.

The rite of marriage and holy matrimony no longer requires the distant blessing of a dictatorial ecclesiastical hierarchy rather, it reflects an equal, open exchange between clergy and client in an era when religious institutions have fallen under increasing pressure to re-imagine the traditional wedding ceremony in order to re-populate Europe's great, empty churches. Perhaps these contemporary wedding trends and ideas reflect the increasing democratization of marriage, which used to mark social approval of a bargain or alliance between tribes but now defers to the individual rights of bride and groom, symbolizing the personal, romantic bond between two people. If this is the new face of marriage, is up to bride and groom to determine how best to celebrate their union, whether in a Home Depot, on a skydiving expedition, or on the verdant lawn of a ruined English abbey.