Why We Can't Wait

A Letter to President Obama With an Attached Legal Brief In Reply:

Reply to the President

We are all children of the same universe, and we each have a right to be here, marry who we want and to serve our nation in every capacity when needed.

Thank you for your response to our previous communications.  I have taken into consideration the issues that you face and the momentous strategies that you are now forced to deal with.  Nonetheless, your mantra of the "fierce urgency of now" rises to the forefront of this issue-- equality for all Americans in all areas, black and white, young and old, and now gay and straight.

Your reply letter implicates a new strategy of gradualism which acts to maintain a wrong, rather than to cure a bigoted injustice.  Gradualism has no place in the denial of civil or human rights.  Gradualism is but a crumb from the table as opposed to an equal piece of the American pie of justice.  I recall Dr. King's address at Riverside Church, wherein he raised the issue of "why we can't wait" saying:

Mr. President, neither God nor Nature can wait for a scheduled gradualism in this 21st Century of Change.

I come as a redeemed sinner with a compelling purpose. A purpose to plead heaven and nature's hidden truth: God made gay people and that heaven and nature demand justice, truth, and fair play.

The LGBT community has been subjected to work and housing discrimination, bashings, lynching and murder throughout the history of this country.  Let us not forget a young gay student, crucified on a fence and left to bleed to death on a cold Wyoming winter night, and many other similar situations too numerous to mention here. Nor can we ignore the latest studies showing that since 1999 there has been an increase in hate crimes, resulting in death and injury throughout America.

One cannot hide the rising number of suicides by gay teenagers, or the number of teenagers who are bullied, beaten, and abandoned by their families and churches, simply because God and Nature decreed their sexuality to be different from the majority.

American hate derives from institutional instruction and attitudes which rise from the indifference of school officials who to turn a blind eye when they see a bully teasing a gay child. Moreover, it is reflected in the attitudes of the military, which contrary to the best interests of our country, insists upon rejecting soldiers simply because God made them gay. These actions wrongly support existing bigotry and teach our children that gays are not equal citizens among God's children.

Mr. President, the world and Heaven is watching you. Our counsel to you is to follow the lessons of presidential history and tradition, impanel a Presidential Commission to set a date certain to remove "Don't Ask, Don't Tell" and stay all pending DADT discharges.

The nominees to head up this panel should be former President Clinton, former Vice President Dick Cheney, Senator John McCain, and last but most important, former General Colin Powell. They well understand the "urgency of now." They will bring the prestige and experience to unite our military in line with the policies of our NATO military allies.

Today, we ask that you instruct our Solicitor General to speak that truth. The truth that the United States of America respects the individuality and sexuality of all Americans, that we are all are children of the same universe, and that we each have a right to be here, marry who we want, and serve our nation in every capacity when needed.

To all: attached herein is a sample brief that outlines an astonishing heritage and contribution that the LGBT community has given to society.  We ask that you use what works, remembering that the power and force of heaven sides with all messengers of truth and justice. 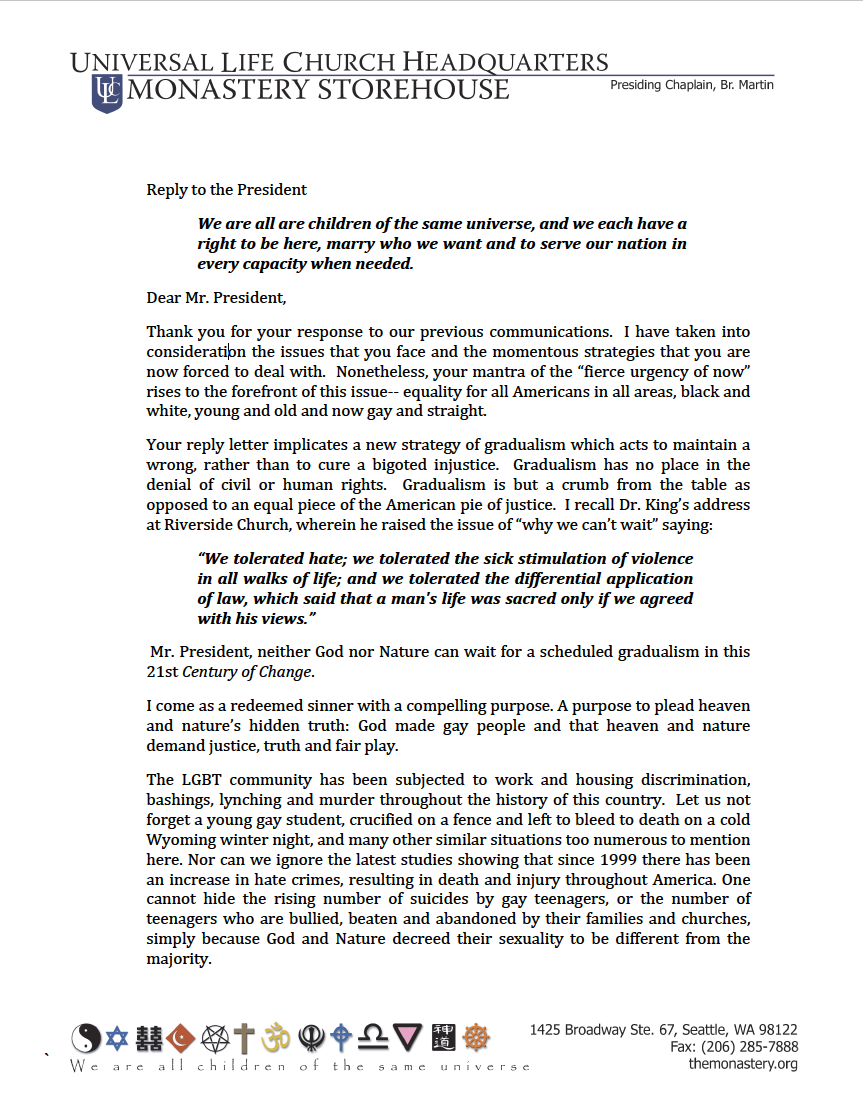 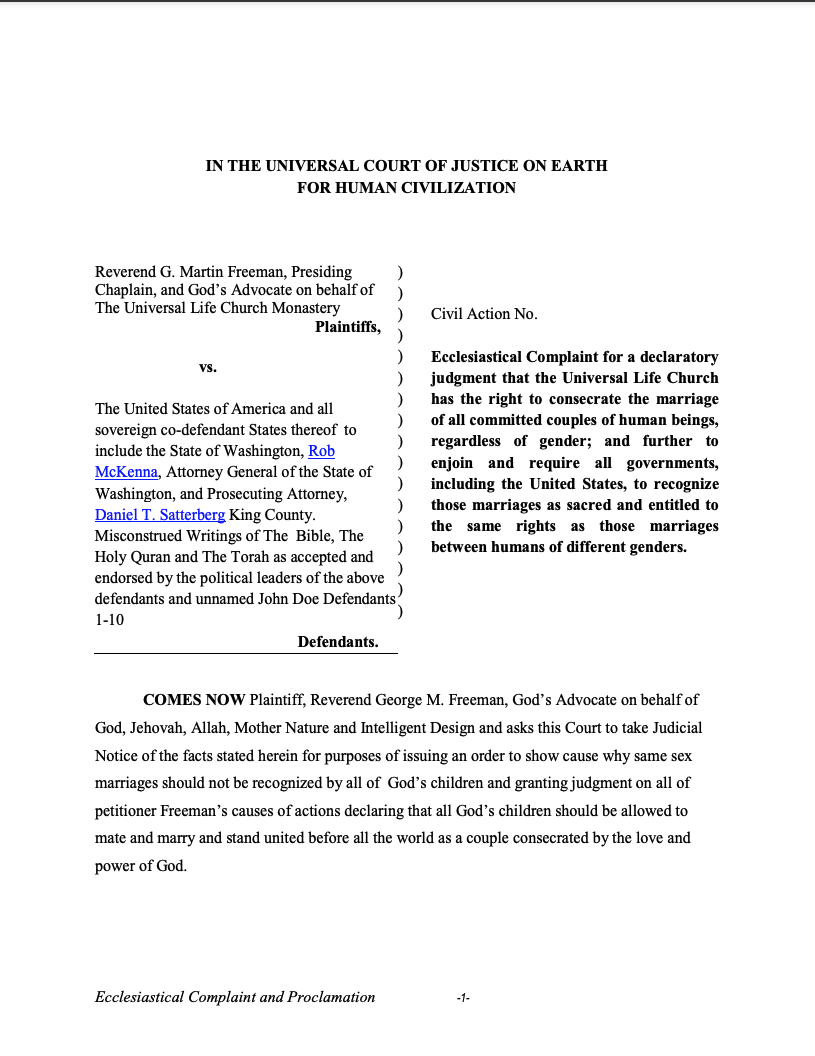 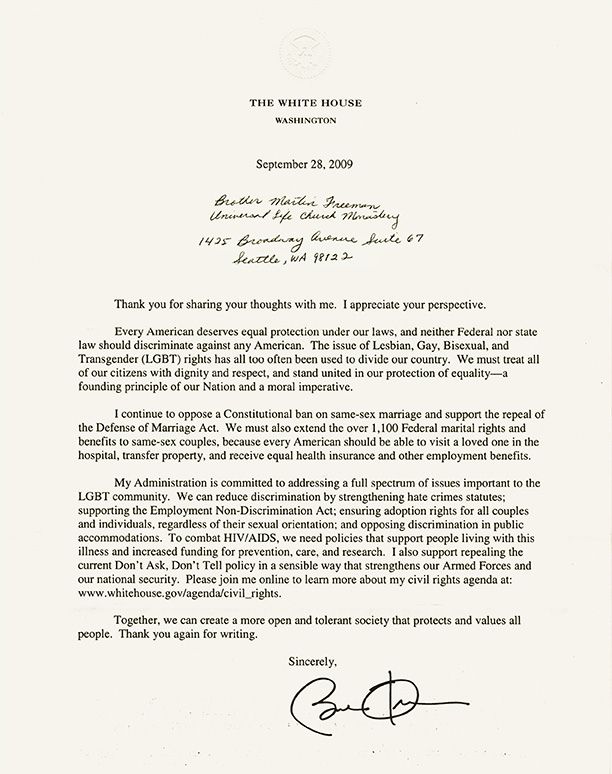 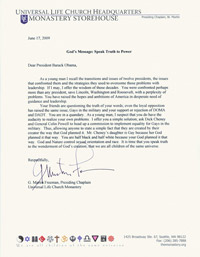