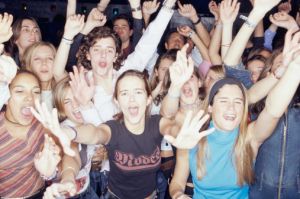 It was almost certainly the highlight of the young couple's life. There was Paul McCartney, former member of the Beatles, smirking at them from the stage as they held up a sign asking him to marry them. With most big-name artists, such a request would have been futile, but McCartney, a humanitarian and philanthropist known for his warm heart, didn't let his superstar status distract him from what is really important. So, the rock 'n' roll icon invited the couple on stage to perform a wedding ceremony for them.

The saga unfolded when wife-to-be Andrea Copado came across a Web site that said all four members of the Beatles had become Universal Life Church ministers. Even though she was born fifteen years after the band broke up, she grew up listening to their music in her home state of Indiana and became a huge fan of McCartney. After her fiancé Adam Kowal surprised her with sixth-row seats to McCartney's concert, it was only natural that the young woman should persuade the man she was going to marry to ask McCartney to do the honor of uniting them in holy matrimony. It was not long before YouTube videos popped up showing the young couple embracing onstage with McCartney looking on.

Actually receiving a response from such an enormous rock legend proved to be a surreal experience for Copado and Kowal. Toward the end of the concert, McCartney finally acknowledged the sign, which read, "You're ordained. We're engaged. Please marry us tonight! Give us a shout! We love you!" The ushers soon guided them backstage and eventually on stage, where they finally met their idol in front of 15,000 people at US Airways Center in Phoenix. Amused at the suggestion that he can legally perform weddings, the former Beatles member revealed, "OK, I'm ordained". After having the couple exchange vows, he pronounced them husband and wife, kiss the bride on the cheek, and signed their poster.

Given McCartney's commitment to social justice and environmental issues, as well as the revolutionary milieu in which the Beatles rose to fame, it is understandable why Copado, along with so many others, should assume the musician is already a ULC minister. Ceremonies like the one McCartney performed for Copado and her husband are what ULC ministers are famous for. We appreciate McCartney's effort to make marriage a more spontaneous, personalized affair, and we wish Copado and Kowal the best of luck in their future life together.