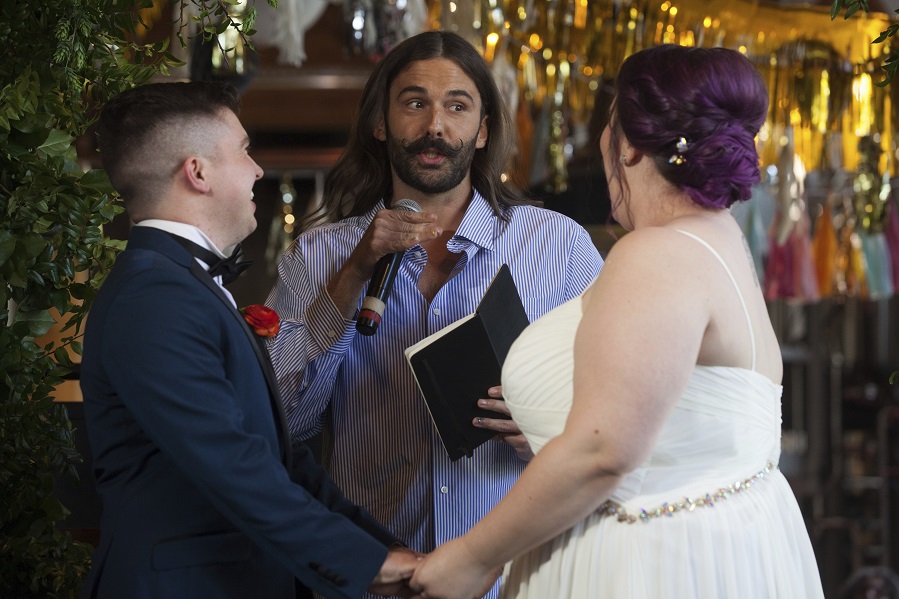 Jonathan Van Ness is best known for his role on the popular Netflix show Queer Eye. But JVN is not just a television personality the multi-talented star also hosts a web series and has his own podcast. And now he's busy showcasing a new professional role: wedding officiant!

According to reports, Van Ness got his ordination through the ULC in order to help couples legally tie the knot. Today, one Seattle couple was lucky enough to call JVN their officiant after winning a Pride month contest sponsored by Elysian Brewing. Contestants were told to create a short video explaining their story and why they wanted JVN as their officiant.

Here is the heartwarming submission video which ultimately won:

View this post on Instagram It would be impossible to squeeze over 7 years of crazy, head over heels love into 60 seconds - but we tried anyway. Seven years, three states, several identities, dozens of pridefests, and thousands of hours of laughter? Yeah, we're ready for this. When we found out about the Supreme Court ruling on same-sex marriage in 2015, we were both at Atlanta Pride for two national LGBT+ nonprofits we worked for. Finn looked at me and said, "So, wanna get gay married?" I said, "That is NOT how you propose to someone." As of today, he still hasn't 'technically' proposed, but when I told him about how amazing (and incredibly appropriate) of an opportunity having @elysianbrewing and @SeattlePride host our wedding would be, he was so down. My favorite thing about us is that we were best friends first - people called it our 'WoMance' (instead of a bromance, because we were attached at the hip.) For a long time, we joked about being 'mutually exclusive friends with benefits' because really, I'm in love with my best friend. Growing up & coming out queer in the Deep South wasn't easy. In it's own ways, it is still hard. But we are also so proud. So proud that we were able to create a life where we can live authentically, show others that #loveislove and maybe, just maybe, have the one and only @jvn help us seal the deal. ????? #pride #transpride ??? #bipride ??? #loveisloveislove #jvn #MarryUsJVN #contest #uofsc #forevertothee #loveyoufour (To our friends and family - we are entering a contest to POTENTIALLY get married on 6.4.19. We don't know yet, but are hopeful!!)

Speaking with local media outlets, the couple explained what this opportunity means to them:

"To have JVN witness and seal our union is such an incredible moment for us - Jonathan has personally emboldened both of us to live our truths in a much bigger way, and we can't believe we will be able to meet him. We have been ready to seal the deal for quite some time, and we could not think of a better way to do it than to celebrate marriage equality and all love with JVN."

No Stranger to the Stage

For fans of Van Ness and his work, it may not be a huge surprise to learn that he is ordained and enjoys officiating weddings. A natural performer, JVN lights up a room and thrives under the spotlight. As it turns out, this wasn't his first rodeo, either:

View this post on Instagram #DougthePug played the adorable ring bearer while #JonathanVanNess of Queer Eye officiated the wedding of Doug's parents on Sunday. |?: Victoria Bonvicini

The growing popularity of online ordination is reflected in a recent survey which found that 43 percent of couples are now choosing a friend or family member to officiate their wedding. But even as online ordination has become more mainstream, it remains a particularly valuable resource for LGBT couples seeking a wedding officiant for their big day.

Instead of being forced to approach a traditional clergy member from the local brick-and-mortar church (who, depending on their beliefs, may or may not be thrilled by the invite) or to recruit an official at the courthouse (which can make for an excruciatingly impersonal ceremony), couples can simply ask a friend or loved one to officiate the wedding.

Not only does this take the pressure off the officiant search during an already stressful time, but it also provides a way to personalize the ceremony, ensuring the event is both joyful and judgment-free.

The Fight for Marriage Equality

Views on marriage equality have come a long way over the past few years, and studies show a substantial majority of Americans now support it. But LGBT couples particularly those who live in less forward-thinking areas know that the fight for acceptance is far from over. The unfortunate truth is that many wedding officiants, clergy members, and government officials across the country continue to believe that marriage should be reserved only for heterosexual couples.

Although the law finally says otherwise, these beliefs run deep. That's why it's so important to have alternative options available. Every couple deserves an officiant who respects their identity and their relationship, and the ULC is proud to play a part in making that a reality.