In a move illustrating the growing acceptance of same-sex marriage, TV legend Patty Duke recently became an ordained minister online in the Universal Life Church. The actress, whom many will remember from her roles in The Patty Duke Show and Valley of the Dolls, recently revealed that she wants to use her ULC ordination to marry as many gay couples as she can. Duke is just the latest in a long line of celebrity ministers who have embraced marriage equality. 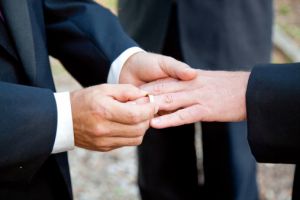 The former 1960s child star and Oscar winner made her announcement recently in a tweet directed to U.S. president Barack Obama. In her message, she told Mr. Obama, "[a]s an ordained minister, I want to marry all the gay couples in our beloved country". A friend of Duke's recently told the press, "Patty loves the fact she can bring people together from all walks of life to celebrate their love," and that "she can't wait to unite as many gay couples as possible now that same-sex marriage has become legal in so many states".

The newly-ordained Reverend Duke has also demonstrated her support for same-sex relationships in her choice of acting roles. In a recent episode of the hit musical television series Glee, the actress played the partner of a lesbian played by Meredith Baxter a lesbian in real life whom many will remember as the mother in the 1980s TV series Family Ties. In their appearance in Glee, Duke and Baxter play a gay couple who mentor gay character Blaine as he shops for a ring before proposing to his ex-boyfriend. And in 1982 she played a lesbian fashion designer in the Canadian film By Design.

The Woman behind the Actress

Social justice advocacy and awareness are not new territory for Duke. The actress has struggled with bipolar disorder for years, largely exacerbated by the alcohol and prescription drugs provided to her by her parents, and her experiences eventually led her to fight for mental health awareness. In addition to her outspoken support for marriage equality and mental health awareness, Duke has appeared in several public service announcements promoting the U.S. social security Web site.

Sometimes the best ministers are the product of real-life suffering. Patty Duke is one such person. The Universal Life Church extends its gratitude to Duke for championing the cause of marriage equality and welcomes her to its family of ministers.