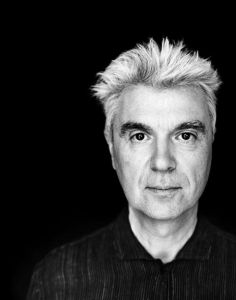 Recently on the ULC Monastery blog, we discussed the online ordination of T.V. personality Jeff Probst (who officiated at "Office" star Jenna Fischer's wedding) as well as pop singer Lady Gaga's plans to become an ordained minister so that she could marry her gay fans. Now, David Byrne, former frontman of the pioneering new wave/post-punk band Talking Heads, has performed his first wedding since his ordination as a minister in the Universal Life Church Monastery. Byrne describes a multicultural wedding ceremony and reception, noting also the curious perquisites that come with being a legally ordained minister.

The happy couple consisted of Byrne's friend and musical partner, Mauro Refosco, and his fiancée, Suyeon Kim, who toured with Byrne and Refosco from 2008 to 2009. The first part of the modern wedding ceremony was traditionally Western in style, with Refosco in a black tuxedo and Kim in a white gown, but for the second part they changed clothes and donned traditional Korean wedding garb, melding different cultures and traditions. Even the guest-list reflected a cosmopolitan character, with guests hailing from Brazil and Korea. In addition, the reception included catering featuring traditional Korean cuisine, while both the wedding planner and bartender have performed with Byrne and Refosco on tour. Even the space where the wedding was performed was pleasantly non-traditional a studio that doubles as an events space when not being used as an art and performance venue.

Byrne also describes the benefits of pastoral care and working as an ordained minister. Some of these, such as no-parking exemptions on New York City streets, are rather amusing. Citing the New York City Department of Transportation, Gothamist contributor Jen Carlson notes that New York City offers permits to clergy members which allow them,

parking for up to five (5) hours in No Parking zones adjacent to the house of worship,

when such member of the clergy is performing official duties. Clergy qualify

presiding over services of a religious corporation or association of any denomination.

According to Gothamist, the permits apply only if the ordained minister or priest is working at least twenty hours a week. For Byrne, who got his permit without trouble after getting ordained online, it is a helpful gesture, even though he doesn't have a car. There is an easy solution to that, writes Carlson: "We say he uses his clergy sticker to lock up his bike wherever he pleases".

But becoming an ordained minister online isn't just about the perq's, notoriety, or even the sense of belonging to a "club" it is about being involved in the lives of friends and family. Critics argue that online ordination shows irreverence for the institution of marriage, but who really shows irreverence? Is it the stranger who officiates weddings because he or she has spent years studying religion in divinity school, or the city clerk who sells marriage licenses to those who have the right set of genitals and $50 to spare? Or is it the familiar loved one who plays an instrumental role in the most important day in the life of their friends and family? It seems as if letting people become legally ordained online in order to officiate the marriages of their own loved ones reflects a greater, more solemn respect for the institution of holy matrimony.

Byrne says he has considered performing weddings of all types in the future from gay and straight to Hindu and Sikh and perhaps even funerals and exorcisms. In the meantime, he says, he's content taking things one step at a time. At any rate, Universal Life Church Monastery would like to congratulate Byrne on his virgin wedding officiation, with the hope of seeing many more, of myriad kinds, to come.

Read more about Byrne's ceremony by visiting the link to his online journal below.