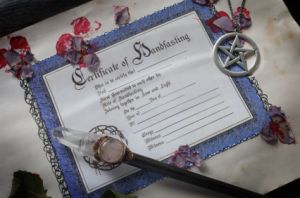 We have heard about extreme adventure weddings (sky-diving, bungee-jumping) and retail weddings held inside a favorite store, but one couple from Florida has added yet another dimension to the modern wedding ceremony. Kelly Morningstar and Sean Wilson decided to hold a vampire-themed Wiccan wedding ceremony inside the Florida mall where Kelly works as an event planner, and the date they chose for the special day, naturally, was Halloween.

The wedding apparel, cakes, and decorations reflected the theme quite effectively. Rather than the usual black tuxedo, white shirt, and bow-tie, the groomsmen donned black tuxedos with purple ties, and the bridesmaids, black dresses with purple sashes. The bride herself wore a deep purple, satiny gown embroidered with sparkling silver arabesques. The main wedding cake was purple and black, with maroon and cream mixed in, and consisted of three coffin-shaped tiers; the cake for the groom, who is a fan of the T.V. cartoon show "Transformers", was topped with the transformer character Optimus Prime. To complete the theme, everybody wore fangs.

The mood was anything but sinister, however. Bride and groom picked Tood Ernst, a minister in the Universal Life Church, as their wedding officiant. As Ernst explained, the mission of the Universal Life Church has always been a benevolent one chiefly, to reconcile divergent faith groups, from Islam and Christianity to Wicca and atheism. There were no blood rituals or animal sacrificing at the Wilsons' wedding; rather, it reflected uniquely Wiccan traditions. The ceremony began with the exchange of dark red roses, followed by the lighting of candles, the exchange of rings and wedding vows, and the blessing of the four elements, earth, air, fire, and water. Ernst then blessed the four cardinal directions and joined the couple's hands in the sign of infinity, and draped colored cords over the joined hands. The couple recited vows in which they promised to honor, respect, love, and express uninhibited sensuality for each other. They ended by kissing and stepping over a besom, or broomstick, in accordance with Wiccan custom.

Guests expressed an appreciation for the unconventionality of the Wilsons' modern wedding ceremony, and for the bride and groom's deliberate eccentricity. The groom's mother, Shirley Wilson, noted that the couple have always been unusual, and that the ceremony works for her, while the bride's father said, "I think it's excellent. I really do.... We're an unusual family. The kids have always been taught to do what they want to do." Perhaps the Wilsons simply wanted to embrace that taboo, "dark" side which has gained an unfair and undeserved reputation for malevolence. When asked why choose vampires for a theme, Ms. Wilson responded, "[t]here's just something seductive, something forbidden." Maybe vampirism is just a metaphor for the couple's interest in exploring and vindicating once and for all a tradition which has been historically maligned.

The Wilsons' vampire-themed Wiccan ceremony is yet another example how increasingly diverse the modern wedding ceremony has become, and a sign that more couples are brave enough to buck the trend, show some originality, and exert some authority and influence over their own personal lives.

Have you ever had an unusual wedding that flew in the face of tradition? Have you ever attended one? We invite our ministers ordained online to share their wedding stories with us.