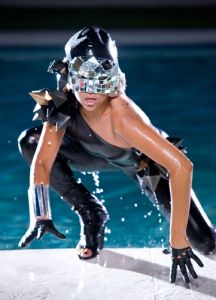 Many of us are already aware of all of the retail weddings, adventure weddings, and other alternative wedding ceremonies that have redefined the way people tie the knot, but now yet another monkey-wrench has been thrown into the cogs of the wheels running the traditional wedding industry. Soon, brides and grooms may get the chance to be married by their favorite pop icon: megastar Lady GaGa has announced plans to become a legally ordained minister.

The worldwide-famous singer of Poker Face and Alejandro, a supporter of gay rights who has inveighed strongly against the passage of California's Proposition 8 banning same-sex marriage, hasstated that she intends to become ordained as a minister so that she can legally perform weddings for her gay fans, a goal which has only been bolstered by the recent federal court ruling repealing the ban. Quoting Heat Magazine, On Top Magazine reports that the star is currently taking online courses in how to become a legal wedding officiant and has undertaken completion of the necessary paperwork to finalize her ordination.

And just as bungee-jumping, skydiving, and even ceremonies held inside Taco Bell and Home Depot have helped to modernize the traditional wedding ceremony and make it more relevant and meaningful to modern-day couples, so are Lady GaGa's plans for solemnizing her fans' nuptials. According to Showbiz Spy and MTV, she plans to incorporate the ceremonies into her live concerts by performing them onstage, where fans will exchange wedding vows in front of audiences characterized largely by a younger, more liberal generation fed up with convention.

The singer has had much to say on her own behalf about the traditional definition of marriage, how it hinders civil rights for loving couples by fixating on procreation and sexual anatomy, and how recent civil rights achievements have inspired her songwriting. After Judge Vaughn Walker repealed Proposition 8, the artist famously wrote on her Twitter feed: "At the moment's notice of PROP 8 death [sic] I instantly began to write music." Moments later, she tweeted in emphatic majuscule letters, "REJOICE and CELEBRATE . Our voices are being heard! Loud! SCREAM LOUD AMERICANOS!" And at a recent MTV awards ceremony, the singer showed her gratitude for receiving 13 Video Music Award nominations, stating, "God put me on Earth for 3 reasons: To make loud music, [make] gay videos, and cause a damn raucous."

But the singer's efforts in promoting marriage equality have not met without opposition. According to Gawker, Apple's new social networking Web site Ping has censored the comments the star made about the reversal of Proposition 8: "Apple left out a string of tweets in which GaGa lauds the downfall of California's anti-gay marriage law in its introduction of Ping, the new iTunes-based social network which lets you connect with artists and other music fans". Could this action on the part of Ping stir up a debate over freedom of speech and media bias? It is food for thought.

It remains to be seen how Lady GaGa's new sacerdotal aspirations will play out in the end, at least in California. The federal appeals court currently reviewing the Proposition 8 case is not expected to arrive at a decision until December. In the mean time, one can only imagine the glittering spectacle a Lady GaGa concert-wedding would consist of, and what a paradigm shift it would entail for the sacrament of holy matrimony in general.