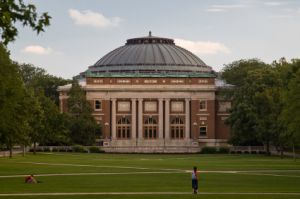 Recently at the Universal Life Church Monastery blog, we posted a story on the dismissal of a professor of Catholicism, Dr. Kenneth J. Howell, from the University of Illinois over controversial remarks he made about homosexuality in an email to students. The post made the argument that Howell was merely reflecting the views of Catholics. However, as it turns out, the claim that Howell was reporting on what Catholics believe, and not insinuating his own, personal views, is at best unclear and suspicious. In addition, it is undecided whether Howell's words should be protected as a form of academic freedom. (You can read Howell's full email in the link below.)

The original post argued that Howell was merely doing his job as an instructor of Catholicism by explaining to students how Catholics invoke a theory called Natural Moral Law to justify their position on same-sex marriage and relationships. The basis for this argument reflected that of the source article, from World Magazine, which also defended Howell for "just doing his job". However, as it happens, World is an evangelical Christian publication, and certain passages from Howell's letter were taken out of context, failing to provide a comprehensive overview. Such a source of information is, at best, biased.

On closer inspection, Howell's use of voice shows little objectivity and professionalism. He does use the third person several times, deferring to what other people believe and what certain theories purport in relation to religious belief and sexual morality, stating, "Natural Moral Law says...", "the utilitarian says...", and "NML says...", so it is easy at first to view his wording as impartial speech reported from a detached perspective. However, this sort of phrasing breaks down frequently when Howell assumes the first person, proclaiming with almost personal zeal, "Human sexuality is inherently unitive and procreative" and "If we encourage sexual relations that violate this basic meaning, we will end up denying something essential about our humanity, about our feminine and masculine nature", all without specifying that this is what other people (such as ministers, priests, and other members of the clergy) believe. In other words, he seems to have lost his vigilance in explaining the views of others in spite of his own. The overall tone begins to suggest, "this is what they believe and I now take up the baton."

Aside from Howell's apparent failure at maintaining an objective, professional tone, there is the problematic little caveat he provides in the last paragraph which raises questions about whether he ever intended an objective explanation in the first place. Immediately before closing his email, he reminds his students,

As a final note, a perceptive reader will have noticed that none of what I have said here or in class depends upon religion. Catholics don't arrive at their moral conclusions based on their religion. They do so based on a thorough understanding of natural reality. This statement can be interpreted in at least two ways: Howell could be reporting objectively that such a moral theory is a doctrine of the Roman Catholic Church, but he could also be saying that religious belief is not the basis for his assertions. Well, if he is not explaining religious belief to begin with, then it is quite impossible that he is explaining the religious beliefs of others. The only other option, then, is that he is proposing a moral system he believes to be universally self-evident and all-compelling.

Finally, Howell unwittingly betrays his own hypocrisy when he haughtily defies his students to prove their knowledge of moral truth, only to reveal his own ignorance in the matter. "Unless you have done extensive research into homosexuality and are cognizant of the history of moral thought", he argues, "you are not ready to make judgments about moral truth in this matter". But at the same time, he makes an embarrassingly asinine display of his paltry, second-hand familiarity with same-sex affection: "To the best of my knowledge," he speculates, "in a sexual relationship between two men, one of them tends to act as the 'woman' while the other acts as the 'man'" (which manipulation of gender if that is what it is would be a bad, bad thing, of course), adding anecdotally that "a physician has told me that these acts are deleterious to the health of one or possibly both of the men". In other words, the entire body of research into the moral truth about homosexuality with which Howell seems to champion his theory is just some camp, exotic rumor he heard through the grapevine from some doctor or other.

If Howell wrote his e-mail as a Catholic, and not as a professor of Catholicism, what is his view on sexuality? It would be a rather perfunctory model in which the sole purpose of sex, according to Natural Moral Law, is procreation. From this viewpoint, human beings participate automaton-like in a breeding program to produce young, not to give pleasure or to bond. The reason? In NML, men and women are complimentary and "fit" together anatomically; no sex act which does not involve the functional binary opposites of male and female in the context of procreation is valid, according to this model. Taking control of one's sexuality and re-creating sexual possibilities for oneself is a perversion, states the theory, not an enriching and empowering opportunity for self-creation. For the NML dogmatist, we should remain as unthinking slaves subservient to a biological imperative to breed which, of course, would cut sterile couples out of the picture, as well as post-menopausal women, couples who use birth control techniques, and even men and women who practice oral sex after all, none of these scenarios are any more conducive than homosexuality to the generation of young. For Howell's NML, what is essential about our humanity is our capacity to make babies, not our capacity to love.

Needless to say, it is the view of Universal Life Church Monastery that romantic love is not limited to couples who exhibit the necessary anatomy for procreation, but is open to any consenting adult who possesses a willingness to love. What are your thoughts? Was Dr. Howell merely explaining to his students the theoretical views of people of the Roman Catholic faith, or was he inserting his own biased perspective into the picture? Should his letter be protected as a form of academic freedom? For if it was not objectively academic in the first place, it follows that it cannot be defended as academic freedom. What about academic integrity, moreover? Let us know your thoughts.

Update: According to the Champaign News-Gazette, The University of Illinois has offered Kenneth Howell his job back, although the school will be dissolving its relationship with the Catholic center that pays the school's Catholicism instructors.