Anne Rice and “Christ without Christianity” 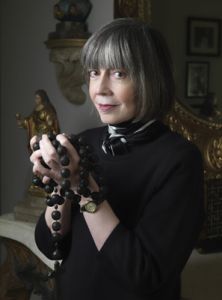 Anne Rice now officially believes in Jesus Christ, and not the institution named after him. The bestselling author of the popular Vampire Chronicles series of novels formally announced 28 July that she was leaving the Roman Catholic Church. Rice, who left the faith at age 18, reverted back in 1998 and started writing novels such as Christ the Lord: Out of Egypt. However, her decision to embrace Christ while rejecting Christianity fails to satisfy either religious conservatives or atheists, leaving the author in a catch-22. But Rice's new spirituality is not necessarily contradictory; it is merely a nuanced composite of beliefs which marry her social conscience with her spiritual predilections.

Rice struggled for years to reconcile the tenets of her Church with her personal scruples, but finally gave up when she decided the Church endorsed too many beliefs she found repugnant. (One might say that, for Rice, there was no longer any baby to throw out with the bathwater only dirty bathwater.) Her objections to the Church's policies run the gamut and mirror those of most liberals. On her official Facebook page, she declared,

The reproof on the religious side came from a Catholic archbishop himself. In a recent Washington Post editorial, former Archbishop of Canterbury George Carey criticized Rice's decision as contradictory, claiming that her belief in Christ was impossible without fealty to the church named after him. In the article, Carey argued,

What Anne Rice said saddens me. I hope she might reconsider her unwise and contradictory statement. If she had said the 'church' instead of 'Christianity' it would have made more sense, but of course I would have still disagreed! You see, Christ is synonymous with Christianity. We only know Christ through his people, through the saints, through the scriptures, through the church. Christ without Christianity is D-I-Y religion Sinatra's 'I did it my way'. It is unwise, because the example of such a lifestyle leads nowhere. These 40 plus American teenagers are keen, practicing Christians who are wonderful examples of Christianity at its best. They know they cannot follow Christ without the church fallible though it is. They also know that you cannot transform the world without one another. That is why Christ called disciples to follow him. If Anne wants to follow Christ she can't do it on her own. But Rice's simultaneous devotion to Christ and rejection of Christianity is not necessarily contradictory, because the terms Christ and Christianity are not necessarily synonymous. Christ can refer to the life and morals of Jesus Christ of Nazareth, and Christianity, to a cult set up in his name after his death. Just because an institution is named after a religious figure does not mean that the institution reflects the teachings of that religious figure. Therefore it is perfectly reasonable for Rice to make a distinction between the two terms, and to reject one while embracing the other. In addition, Carey faults her for exploring Christ outside the official sanction of the Church. So what if she did? Why should a person go through a priest or a church to understand the teachings of Christ? Where did Christ say we should? It is reason, conscience, intuition, and reflection which are required for spiritual exploration, not blind faith in the word of a self-styled authority. Therefore, if Anne wants to follow Christ, she most certainly can do so on her own.

Then there are the atheists who rebuke Rice for failing to adopt the extreme opposite view and abandon entirely the esoteric and mystical beliefs which she treats as valuable insight on how to live a good life. (The poor girl can't win.) At the blog Godless Girl, the author bemoans the fact that Rice acknowledges the possibility that there is more to the natural world than meets the eye:

that's not good enough! Rice is clearly not abandoning her mythology and superstitious delusions. She's leaving conservative, fundamentalist Christianity behind and making a political stand out of it. But what about liberal Christianity that is still based on the same myths, but is dressed up in hipster clothing and alaissez faire [sic]attitude? When Rice realizes the whole shit n' caboodle is based on a false premise, then perhaps she might leave for good. Perhaps. Indeed, Rice is clearly not abandoning what the author labels mythology, and, as one commenter points out, it is beside the point to take issue with Rice's belief in a spiritual dimension to reality when she already so vehemently defends social justice causes:

I think it's no ones business to say "not good enough". It's her spirituality, her views, her beliefs and her life. Who are you to demand "better" of her in her own belief system. She already rejects human rights injustice, bigotry and ignorance, etc the important parts so she holds onto a belief in the super natural that's her right and prerogative. [sic] So what if Anne Rice believes that the soul survives physical death, that spirits exist, or that there might be a higher consciousness pervading the universe? She defends civil rights, women's rights, gay rights, science, and secular humanist thought, so it is hard to imagine her burning anybody at the stake for heresy any time soon. But the blog's author fixates relentlessly on what she deems "a false premise" and "superstitious delusions" (as if these ambitious and questionable claims aren't enough), even dismissing the very "laissez-faire"attitude that so many secularists themselves cherish, as though the most important thing in life is to prove somebody right or wrong, and not to get along with them. It is a petty and truculent position to take.

Of course it is impossible to please everybody all of the time, and there will always be evangelicals on both side of the egoistic and divisive "I'm right, and you're wrong" playing field. The important thing is that Rice thinks critically and refuses to cow-tow to convention for its own sake. What do you think? Is Christ without Christianity a change for the better?