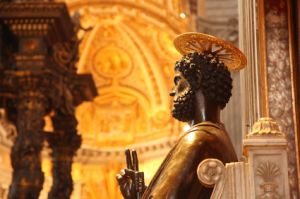 Here at Universal Life Church Monastery blog, we have been paying close attention to the growing acceptance of women clerics, many of whom belong to traditionally marginalized racial, ethnic, and sexual minority groups. The Old Roman Catholic Church, a recalcitrant offshoot of the Roman Catholic Church, is no exception to this rule, and it is possibly the first church to permit the ordination of women in the unofficial Roman Catholic tradition. It also reflects an overall growing dissatisfaction with the doctrines of the Vatican.

Perhaps not unexpectedly, the church, which broke away from the official hierarchy in the nineteenth century in protest of the doctrine of papal infallibility, is in full co-operation with the Anglican Communion, a loose-knit federation of ecclesiastically independent churches in the Anglican tradition which commonly ordain women as priests. The woman in question, 35-year-old Sicilian Maria Vittoria Longhitano, was ordained at the Anglican All Saints Church in Rome but is also a member of the Old Catholic Church. In addition to the ordination of a woman, the ceremony featured a transgendered woman organist, Luana Ricci, who was excommunicated from the official universal church in Puglia for having gender reassignment surgery. As if a woman priest and a transgendered organist were not enough to provoke the Catholic hierarchy, Longhitano is married a strictly forbidden act among Catholic priests.

While the first woman to become a priest was Teodora Tosatti, who was ordained in 2006 in Bonn, Longhitano was the first to be ordained in Italy, just blocks away from the Vatican itself. Explaining the rationale for admitting women into the priesthood, she argued, "I have opened the way. Catholicism means universality, and without women it is mutilated", pointing out that Italy is "ready to welcome a female ministry" and that her fellow Sicilians had already asked her, "[w]hy don't we have the joy of women priests?" Longhitano's words are likely to create a rift (if there is not already one) between Anglicans and the Holy See, which recently began admitting into its ranks disillusioned Anglicans who left the Communion when it started ordaining women.

Despite the rancor of these old-fashioned Anglicans over the ordination of women, the archbishop of Canterbury, Rowan Williams a leader in the English Church defended in Rome several months ago the view that women should be allowed to become priests, possibly widening the rift between the Communion and the Vatican even further.

The views of Longhitano and Williams sit in stark contrast with the doctrines of Roman Catholics, who maintain that spiritual authority rests in the hierarchical institution of the Church, and evangelical Protestants, who place sole spiritual authority in the sixty-six books of the canonical Bible; for Catholics, Jesus bestowed this authority on the apostle Peter in a supposedly unbroken line of male apostolic succession, while Protestants point out that in the Second Epistle to Timothy, 2:12, Paul told Timothy, "I suffer not a woman to teach, nor to usurp authority over the man, but to be in silence". Conservative theologians generally argue that Paul was inspired by God to make this injunction against female authority over males.

Why should we believe that the pope is divinely inspired by God just because the pope claims to have succeeded by heavenly guidance down a line started by Jesus Christ, and why should we believe that the sixty-six canonical books are divinely inspired just because ministers say so, or just because the books themselves say so? Bias in favor of oneself is not exactly objective evidence. If this kind of faith is too fantastic to accept, and if divine inspiration also takes place through critical thinking, reflection, and mystical revelation, Longhitano's words deserve serious consideration. What about women's gifts, talents, experience, wisdom, and intelligence? How are these unfit for guiding men spiritually? What about fairness and the right to have an opportunity to realize these attributes fully? How can we believe that God wishes for us to exclude half the world's population from roles of spiritual authority over men simply because they are biologically different? Traditional cultures around the world have benefited from the insight of priestesses, female shamans, and witches, many of whom wielded great authority in their societies. Indeed, by persisting in the attitude that women require men to serve as a conduit between them and divine wisdom, we ignore our potential and cripple the priesthood with arrogance and smug self-deception. We remain incomplete.

Of course, the Church is free to practice its religion as it sees fit, as are the many Protestant denominations which pepper the United States, relegating half its followers to the degrading role of stupid, wide-eyed dependants, but this does not mean that we cannot affect change peacefully by persuading people to challenge their long-held beliefs. With the ongoing debacle over child molestation by Catholic priests and the increasing disenchantment with papal authority (especially that of Pope Benedict), it will be interesting to watch the Vatican and see whether it adapts in accordance with new insight, or cracks and crumbles out of centuries-old patriarchal stubbornness.