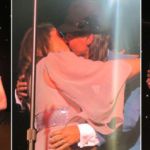 We all know the Village People for classic hits like "YMCA" and "In the Navy", and for their eccentric, flamboyant outfits depicting archetypes like the biker, construction worker, police officer, sailor, Native American, etc., and now two members of the inimitable dance-pop group can add "Universal Life Church wedding officiant" to their resume: the two band-members, Eric Anzalone, the "biker", and Felipe Rose, the "Native American", recently performed a wedding ceremony in concert for two of their fans, Elberta Smoak and Frank Goldsmith.

The wedding was performed on-stage at the Starlite Theatre in Las Vegas after an email request from Goldsmith, the groom-to-be. Initially Goldsmith assumed the band would reject the request. "I saw that the Village People were playing [in Las Vegas] and thought, 'Wouldn't it be great if I could email them and get a little rejection letter that said, "We can't do your wedding, but we're so happy for y'all"?'" he told Huffpost Weddings, adding, "I'd frame it and give it to [Smoak] and say, 'Hey, the Village People are happy we're getting married". To Smoak and Goldsmith's surprise, however, the band responded in the affirmative and agreed to perform a modern wedding ceremony for the couple. According to Huffpost Weddings, Anzalone said "[the wedding] was never on my bucket list, but it's definitely one of those cool things I can say that I've done", adding that it is "going to be one of those things where I can say, 'Yeah, I performed at Radio City Music Hall. Yeah, I got a star on the Walk of Fame. Yeah, I've actually married somebody'". The "yes" response to Goldsmith's email turned out to be a once-in-a-lifetime opportunity for him and Smoak and added some rather idiosyncratic, attention-grabbing entertainment value to the band's repertoire.

The ordination process for Anzalone and Rose turned out to be surprisingly easy. All they had to do was to become ordained ministers in Smoak and Goldsmith's church, the Universal Life Church, which is exactly what they did. Smoak and Goldsmith registered their ordinations online themselves, but the ordination was consensual: they met Anzalone and Rose for the first time at the Starlite Theatre, where they knelt, placed their hands on the band-members' shoulders, and said a short prayer as part of an ordination ceremony. That allowed Anzalone and Rose to legally marry the couple, and this is what they did in a short ceremony in concert just before performing "YMCA".

And that's how you get married by members of The Village People: send an email, get them ordained in your church, and attend an in-concert wedding performed by a man in leather and another one dressed as a Native American chief. All the right ingredients for an offbeat wedding are there: the celebrities, the flamboyance, the concert, Las Vegas. Even better, because it is a ULC ordination, it is completely legal. Now, we're not recommending tens of thousands of fans start flooding the band with emails requesting them to officiate their weddings, but is nice to know the band can be so accessible to their fans. The ULC Monastery would like to congratulate Smoak and Goldsmith on their wedding, and we hope to see Anzalone and Rose perform many more in the future.