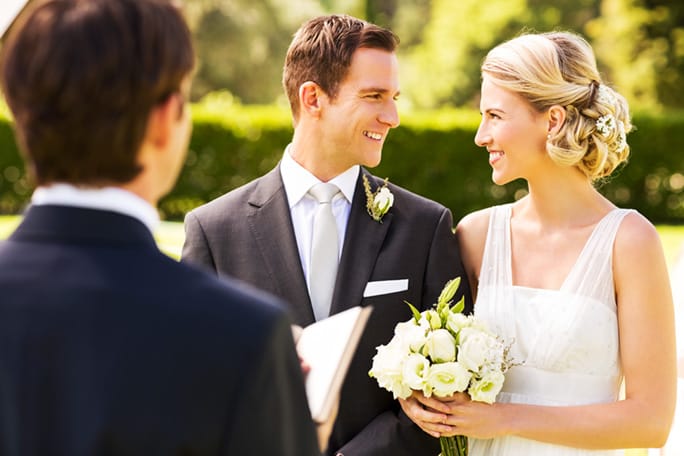 Don't Forget to Make it Official

A quick final note — after performing the ceremony, make sure to fill out the marriage license! IMPORTANT: Laws vary by state, but marriage licenses are generally only valid for a period of 30-90 days. Visit our State Marriage Laws page for more information. Communicate with the couple and do your homework — the license should not be obtained too far in advance, and should be returned promptly to the correct authority after the ceremony to ensure that it doesn't expire. In a majority of states, this is the officiant's responsibility. While it is acceptable to mail the license, dropping it off in person is preferred in order to avoid any unforeseen complications.

Once the paperwork has been submitted, you have officially completed the wedding ceremony. Congratulations!

Note: this guide provides a basic overview of how to perform a wedding ceremony. More in-depth information and guidance can be found in the literature shown below.

Popular Books to Help you Perform a Ceremony

By The Power Vested in You

A Wedding Ceremony To Remember

After the Ceremony Minister's Duties and Responsibilities

As the wedding officiant, it is usually your job to round up the bride, groom and official witnesses to sign and date the official county or state marriage license, as well as the keepsake decorative certificate that most couples will keep for the rest of their lives. Often our ministers will present the couple with a copy of your Ordination Credential or the official Wedding Officiant Certificate showing your legal status as a Universal Life Church Minister. In a majority of states, it is one of the officiant's responsibilities to return the properly completed, signed and dated marriage license to the county clerk or registrar. Please allow time for the photographer to record this process for the couple's scrapbook. We have a variety of Decorative Certificates in our catalog.

Certificates for you to Present after the Ceremony

A wedding day is often considered one of the happiest moments in someone's life. It is important for the people involved as it signifies the start of a new life together under the context of law and religion. A wedding usually involves a form of ceremony. According to anthropologists, wedding ceremonies are rituals of transition or the rites of passage for both participants. Such rites occur when the individuals are crossing the boundaries of age or even social status. Just like birth or death, weddings create changes not only in the lives of the bride and the groom but also for the people who are connected to them. Wedding ceremonies allow the expression of emotion through the individuals' announcement of their union to the community. At the same time, wedding ceremonies allow the community to express their support and approval to the pertained union (Skolnick, 2009). Thus, such ceremony does not only serve as the union's social recognition, but it also serves as an avenue for people related to the bride and groom to share the momentous occasion and reunite with friends, relatives, and acquaintances.

Wedding Ceremonies From Around The World

Commonly, wedding ceremonies around the world share rituals that are influenced by various cultural traditions. Among the many rituals practiced during wedding ceremonies, the most essential and constant element is the symbolic expression of the unification between the man and woman. The union can be signified by exchanging rings, joining of hands, tying together the garments owned by the bride and groom, or other gestures that could be a representation of the union between the couple. Likewise, many rituals that are incorporated within the ceremony are done in order to emphasize the wedding as a passage for the foundation of the family. For example, in Hindu wedding ceremonies, the couple circles a sacred fire in order to promote the fertility of their union (Skolnick, 2009).

Traditionally however, wedding ceremonies are often associated with the religious stance of the participants. Most wedding ceremonies are carried out in the context of religion in order to strengthen the sacredness and spirituality of the bride and the groom's union. Many religions and denominations have distinctive wedding ceremonies that are often the reflection of their faith. Among Roman Catholics, wedding ceremonies involve a nuptial mass, during which scriptural texts are read about marriage. Commonly, a priest and witnesses are present as they are the ones who consent and testify to the union of the bride and groom. In Orthodox Jewish ceremonies, the bride and groom stand under a “chuppah,” which is a canopy that serves as the metaphorical representation of the home that the couple will establish later on. Thereafter, the groom smashes a wineglass, which is believed to be the commemoration of the destruction of the first temple of the Jewish people (Skolnick, 2009). In the tradition of Islam, weddings, referred to as “Nikah,” are usually multi-day celebrations. During the ceremony, the bride and groom are separated in different rooms and an officiant who is very much familiar with the Islamic law heads to each of the room and asks the spouses certain questions concerning their marriage. Unlike in other religions wherein the bride can speak for herself during the wedding, a Muslim bride has a representative known as “wali” who is responsible for answering the questions of the officiant on behalf of the female spouse. Once the marriage contract is signed by both participants, it is only then that the couple would be allowed to see each other and be pronounced as husband and wife (Bose, 2009).

A Vow, A Promise

Generally, a wedding ceremony is one way of defining the rights and obligations of the partners toward each other. However, whatever wedding ceremony the couple prefers to follow, be it the traditional religious ceremony or secular ceremony, the value of the occasion is embedded in the new beginning that the couple is about to face together.