Humanists Can Perform a Wedding, Too 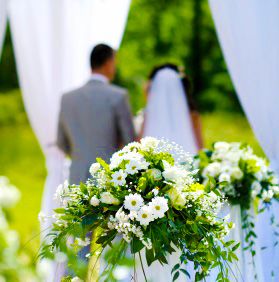 Is it possible to get married without a "blessing from God," or is the whole idea just a ridiculous fantasy? A growing number of people from the humanist community are defying old notions of ordination by becoming ministers to perform a wedding, showing that not all wedding officiants need to personally adhere to traditional religious beliefs. To satisfy legal requirements, however, if these humanist individuals are not justices of the peace (or in another locally-authorized political position) they must be ordained clergymen with a valid church such as the Universal Life Church Monastery in Seattle.

The U.S. State of North Carolina is just one place where the trend of couples having a humanist wedding ceremony has been taking off. Wilmington couple Mike and Amanda Holowaty, who are atheists, wanted to celebrate their lives together without invoking a deity, but their families, who belong to traditional faith groups, were not so certain: Amanda's family is Methodist, while Mike's grandmother is Eastern Orthodox. They compromised, knowing that they could find a wedding minister through the Humanist Society, and the result was an apparent success. "Nobody seemed to notice that we didn't mention God," Holowaty told The Washington Post. "People came up afterward and said it was one of the best weddings they'd seen."

Non-religious ordination has been on the rise. The new services are a response to the growing demand for nonsectarian ministers resulting from the rising number of "nones," or people who are not affiliated with any religion. As it happens, many humanists who become ordained ministers do so through the ULC.

The problem for these groups, says Amanda Holowaty, is one of exposure. Many people are still unaware that there are ministers can perform a secular wedding ceremony, because advertising for these services is largely lacking in the humanist community: most of the ministers listed on the Humanist Society Web site lack a personal site. "As soon as you do the advertising, people are like, yeah, I want that," said Florida humanist writer and blogger Jennifer Hancock, according to The Post. "When I got married, I was worried. I didn't want any religious references in my wedding because I didn't want to start out the most important relationship of my life with a lie." For marriage celebrants like Hancock, who want the benefits of a wedding ceremony without the religious trappings, all that is needed is a better advertising strategy.

Wedding ceremonies are not just for the pious secular humanists (who are not always atheists) can throw weddings too, because everybody has the right to celebrate the loving union of two people. Why, then, should those who do not belong to a traditional faith group settle for a minister who fails to represent their values? As Hancock said, to do so would be to lie. For this reason, the rise of the humanist wedding industry fills a much-needed gap, and we as Universal Life Church ministers can be happy for people like the Holowatys.