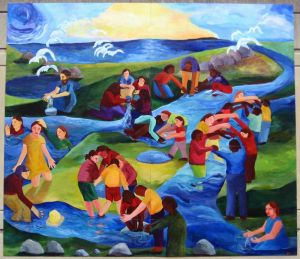 By now it should be apparent that young people are becoming increasingly disabused by religion and leaving conventional churches in ever growing numbers, but are they seeking a spiritual alternative, and if so, what? In a recent Huffington Post article, Rory McEntee and Adam Bucko describe the rise of what has been termed the "interspiritual movement" a movement spearheaded largely by young people and geared toward recognizing a common spiritual identity outside the confines of orthodox religion. What they describe uncannily resembles the vision and mission of the Universal Life Church Monastery.

The term interspirituality, according to McEntee and Bucko, was coined by Brother Wayne Teasdale, a Catholic monk who decided to become ordained as a Christian sanyaasi, or Hindu monk. In his book The Mystic Heart: Discovering a Universal Spirituality in the World's Religions, he writes that "[t]he religion of humankind can be said to be spirituality itself, because mystical spirituality is the origin of all the religions," adding that "interspirituality the sharing of ultimate experiences across traditions is the religion of the third millennium," and that "[i]nterspirituality is the foundation that can prepare the way for a planet-wide enlightened culture". Already, strains of Brother Teasdale's interfaith message can be found in our message as ministers who become ordained online.

Dr. Kurt Johnson, an evolutionary biologist and former Anglican monk, has expanded upon this concept of an "interspiritual revolution," posing questions for ULC ministers about how their work might dovetail with this emerging movement. Together with David Robert Ord, Johnson trace the lineage of the interspiritual revolution using an evolutionary model in the book The Coming Interspiritual Age. Bringing together world religious traditions as well as findings in cognitive science, consciousness studies, anthropology, and developmental history, they describe a natural phenomenon that has its roots in the Big Bang and has developed over time as different manifestations of one common mystical pursuit. For Ord and Johnson, the evolution of the species is propelled forward by the world's religious traditions, which form one movement.

Not everyone will embrace this model of spiritual evolution with open arms, however, and both theists and atheists have arguments for rejecting it. The reductive materialist argument against the existence of a spiritual dimension to reality is perhaps most obvious among these, but other people are circumspect about the idea of spirituality becoming untethered from religion. Without the rules and structure of formal religion, they argue, spirituality becomes reduced to an exercise in self-centeredness and hedonism. But religious orthodoxy is also notorious for its concern with money and power, while young, spiritually "progressive" individuals enjoy a reputation for showing compassion towards historically marginalized groups and people who are different from them. We must then ask ourselves whether this interspiritual movement represents our values.

The revolution described by Teasdale and later by Johnson and Ord acknowledges the validity of religious pluralism as well as the pursuit of spiritual enlightenment common to all religious traditions. In doing so it has earned the derision of materialists and religious traditionalists alike, but many of us will find it overlaps comfortably with our own values, and with many of the elements of our vision and mission as Universal Life Church ministers. Part of this mission, after all, is to "do that which is right", so long as this harms no one, and to recognize that "we are all children of the same universe."