How to Perform a Nondenominational Wedding 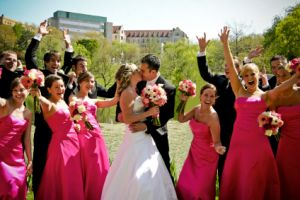 [/caption]Online churches like the Universal Life Church Monastery have long offered a way for anybody to get ordained online and marry their friends and family in personalized, meaningful settings, but many ministers still have questions about the logistics of wedding officiation and the legality of online ordination. We thought we would take a look at a couple of ordained ministers in the ULC to illustrate how fun and easy it can be to perform a wedding ceremony for your loved ones.Erica Ried Gerdes, a performer and choreographer, and Bex Schwartz, a writer, director, and performer, are two women who exemplify the creative energy and dedication of newly-ordained ULC ministers. The women both decided to become an ordained minister online in order to marry friends and relatives who knew and trusted them. Like many new so-called "mail-order ministers", the women had to do a little research and navigate around the roadblocks to performing legal weddings, and their stories may go far in answering questions and assuaging the concerns of other ULC ministers.So what did Ried Gerdes and Schwartz learn from their experiences? One of the [caption id="attachment_1740" align="alignright" width="200" caption="Marriage paperwork"] 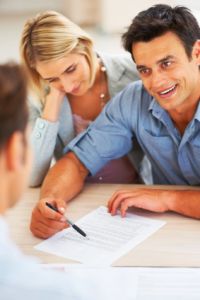 first things a prospective minister asks is how difficult it is to obtain a legal minister''s ordination credential through an Internet church. Schwartz cheerily explains how simple the ordination process is: "It is a piece of the cake, as they say! You go to the

ULC's site and click a few buttons, and, bam, you are ordained", she tells Claire Zulkey on her WBEZ 91.5 blog. But that is just the ordination process itself. What about getting registered? Schwartz explain the necessary steps for wedding officiation in New York City, where she performed her wedding: "If you want to perform weddings in NYC, you need to register with the City Clerk's office as an officiant", adding that one simply needs to obtain the ULC New York City wedding officiant package, which includes all of the necessary paperwork, "and fill out the forms with the city of NY. Then you go down to the City Clerk's office and exchange all the forms and then they bring out a giant book and you get to sign it". Showing its support for the LGBT community, the ULC Monastery also offers New York City same-sex wedding officiant packages, which are legally identical to the regular package but are custom-tailored for same-sex couples. Of course, this only counts for New York City, but if you do not live there, do not fret—the ULC Web site will guide you to sites which provide wedding laws for other states and countries (as mentioned above). Fortunately, ministers ordained online can solemnize marriages in most U.S. jurisdictions.

Once the technicalities of getting ordained and registering as a new minister are sorted out, there are other concerns people have about performing a modern nondenominational wedding ceremony. One of these is how to integrate the bride and groom''s unique personal tastes and preferences into the ceremony in order to make it relevant. Fortunately, online ordained priests and minister already tend to be friends and family or bride and groom, but it is still helpful to point out the ways in which the wedding officiant can make the ceremony perfect. One way, Schwartz tells Zulkey, is to go over samples of wedding ceremonies from the religious backgrounds of bride and groom, either choosing or rejecting one and then tailoring it to fit the bride and groom''s preferences. Another way is to incorporate stories or anecdotes about the bride and groom that will amuse guests and make them laugh. Of course, it is also important to consider personalized wedding vows, which may require assigning homework to bride and groom asking them to draft the vows that best express their feelings for one another. Perhaps most important of all, as Ried Gerdes notes, is to get a clear idea from bride and groom of exactly what basic theme they want for their wedding: "quirky, traditional, long, short, family related or not, religious, secular, readings, songs, etc." The point is to get a crystal-clear idea exactly how bride and groom want their ceremony to be designed and conducted, and what themes, narratives, and values should be integrated into the ceremony based on feedback from bride and groom.

In addition to these issues, new ministers should anticipate the occasional patch of rough waters in planning and performing wedding ceremonies. Schwartz and Ried Gerdes both describe some of the more challenging times in their ministries, giving other ministers an opportunity to do their homework, as it were, and prepare ahead of time. For Schwartz, the most challenging part of wedding planning and performing is making it special for the couple: "The most challenging part of the ceremony is scripting it so it is truly unique and representative of the couple. Every couple is different and deserves their own special language and I need to make sure their ceremonies make them happy." Ried Gerdes expresses a similar concern: "Writing the ceremony is rough, ‘cause you want it to be special to each couple, and when I send it off for approval, I think that is the most nerve-wracking part--what if they hate it?! I get nervous if/when they send revisions." Some of these challenges are made easier, however, by wedding planning guides and resources such as Baker''s Wedding Handbook: A Resource for Pastors. The point is to get as much feedback as possible from bride and groom and organize this into an eloquent narrative which provides a profound and accurate portrait of the love that brings them together on that day.

These bits of advice only touch the tip of the iceberg, of course, but they do cover the basics. Obtaining a legal minister''s ordination credential is easy since the church''s belief that everybody should be allowed to minister is a protected freedom; it is important to discuss ideas with bride and groom ahead of time and get feedback from them about their values, personal stories, and aspirations; and, finally, to avoid disappointment it is vital to prepare a wedding script which integrates these elements in a powerful and relevant way. Becoming a wedding officiant and performing marriage ceremonies for loved ones can be a daunting task, and it raises many questions that often go unanswered, causing a great deal of head-scratching, but, as the stories of Ried Gerdes and Schwartz illustrate, it actually turns out to be much easier than the old-fashioned way, not to mention the fact that it allows you to play a vital role in the lives of people you know and love.