A historic Washington D.C. church has taken a gigantic step by appointing its first lesbian couple to partner-lead the congregation. The Calvary Baptist Church will now be led by Sally Sarratt and Maria Swearingen, two women who are bringing an entirely new image to the pulpit. The lesbian couple has extensive ministerial experience, and church officials say their values align closely with those of the congregation. 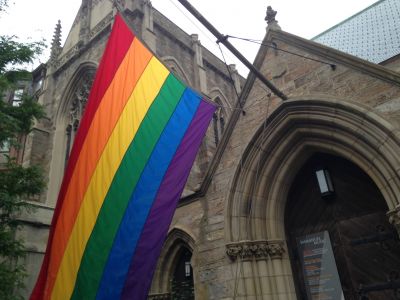 While many congregations across the country have gay pastors, Sarratt and Swearingen become one of the first married gay couples to share a spot on the pulpit.

Swearingen calls the job a "dream that has unfolded", and says that she never imagined it being possible when growing up. The young pastor also sees the shift toward modernization being in line with the goals of church, despite the fact that progressive values tend to fly in the face of long-held ideas and traditional religious beliefs. She explains that "the work of the church has been and always will be to set the table of hospitality for all people."

Although many denominations are trending toward more tolerant beliefs, there has been no shortage of criticism for the decision to put a lesbian couple on the pulpit.

Just weeks after the decision, protestors burst through the doors of Calvary Baptist Church carrying signs and chanting slogans. The group told church members they "were going to hell" for allowing gay pastors and that the building was now "the house of Satan."

Strong disapproval was also voiced by members of the Southern Baptist Convention (SBC), a socially conservative branch of the Baptist faith. Current SBC pastor Joseph Lyles said he was "surprised" and "concerned" to hear about the move. He finds it "difficult" to support same-sex relations "with a biblical basis". Another pastor pointed to the hiring of Sarratt and Swearingen as an example of the progressive branch's "impulse to try to modify Christianity". 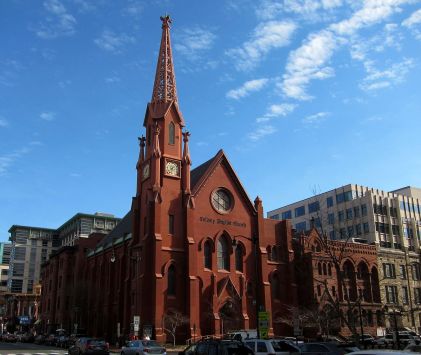 Calvary Baptist Church is a landmark in the heart of Washington D.C. From a first glance, it's easy to understand why this place holds a special place in the hearts of locals believers and non-believers alike. The beautiful red hue of its jagged, gothic architecture contrasts against the clear, balmy sky as it juts up from a subdued Washington D.C. street corner. The whole scene makes for a traditional picture of the nation's capital.

However, the Calvary Baptist Church is anything but traditional.

It was first founded by abolitionists way back in 1862. In the 1980s, it broke unwritten laws by welcoming women into leadership roles. Then in 2012, it formally cut ties with the Southern Baptist Convention due to "major perspective differences" namely its attitudes toward the LGBT community. In 2014, Calvary Baptist Church ordained the first transgender Baptist minister.

By naming a lesbian couple to lead the congregation, the historical church has further cemented its reputation as a haven of progressive attitudes within the sometimes-rocky religious landscape.

Many people can remember a time when homosexuality was a serious taboo, not only in religious circles but in larger society as well. Now same-sex marriage is legal nationwide, and gay couples are standing at the same pulpits which refused to accept them just a few generations ago.

For many, this new cultural landscape represents a continued march toward tolerance and compassion for all. Others see it in a darker light: as a degradation of religious values and Christian morals.

Where do you stand? Does allowing gay leaders to preach at the pulpit go against the teachings of the Bible, as some would argue? Or is this simply the next logical step in progressive religious tradition?