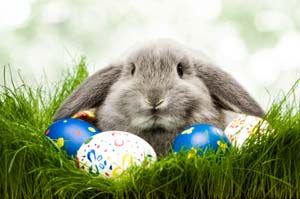 Many of those preparing to celebrate Easter may not realize there are others planning to celebrate Ostara at the same time. The two holidays are actually closely related and draw upon similar historical roots. Ostara is essentially the pagan incarnation of the traditional Christian Easter. The Christian tradition itself draws the name from the pagan god "Oestre" or "Eastre." This word has Germanic roots and refers to the eastern direction from which the sun rises. Oestre is the Teutonic goddess of spring and dawn who is very closely associated with the Vernal Equinox.

The Vernal Equinox takes place each year between March 19 and March 22, while Easter always occurs between late march and early April. In the past, beginning with the pagans, this time of year was celebrated as one of renewal and rebirth. Christians adopted the symbolism to represent the resurrection of Christ rather than the earth itself. Other religious traditions predating Christianity have had similar figures that utilized the same symbolism. Hathor, the Egyptian figure that experienced rebirth is merely one example.

According to myth, pagan children would present eggs as a gift to the goddess in return for the coming of the spring. Oestre traditionally carried an egg to symbolize birth and new life. Christian traditions incorporating eggs have not strayed very far from this practice. The popular depiction of the rabbit associated with the Christian celebration has its roots in the pagan tradition as well. Ostara was said to have been so touched by the gifts that she recruited her minions to return these eggs to the children in baskets. The minions were rabbits.

March and the location of the sun also mark the time for the rutting of rabbits. This implies elements of fertility in relation to the bounty that the earth cultivates during this time of year. Other popular legends have emerged on the Equinox as well. The word translates as "balance," bearing some responsibility for the idea that an egg could be balanced on its end only during this time. The days and nights also reflect this translation; during this period of time, light and dark are equally 12 hours long.

Early Christian churches were more sensitive to the pagan roots of the celebration of Ostara and disapproved of the incorporation of eggs and rabbits into the holiday. Followers of the pagan traditions would bury eggs in the ground to celebrate the spring. The priests of the day encouraged children to remove the symbols of worship from the ground. They rewarded the children by paying them a small amount for each egg they collected and returned to the church. However, time quickly engrained these symbolic references into the Christian mythos to form the holiday that is now celebrated all over the world.