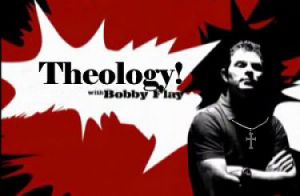 While it is unclear what Bobby plans to do as a minister, we here at the Universal Life Church Monastery came up with several theories:

Instead of challenging other chefs to a cook-off, Reverend Flay could challenge other ministers to a theological throw-down. At the beginning of each episode, a Jehovah's witness would deliver- via bicycle- the specific scripture he would have to study, as well as the minister he would face off against.

Rev. Flay would then be given some time to decide what method of study and what version of the Bible he would use. The ministers would be judged and given points based on how reverently they approached the matter, their level of humbleness towards the subject, and how astute they were in determining the meaning of the text.

We imagine this show could pit aspiring seminary students against popular ministers like Billy Graham, Rick Warren, or Reverend Flay himself in a series of epic ecclesiastical clashes. During the show, the ministers have one hour to complete ministerial duties using limited, predestined supplies.

For example, the first episode could feature a battle of baptisms. With a few supplies, including holy water and anointing oil, the ministers would compete to see who could baptize as many people possible.

The judges would observe then inspect each baptized person, and give points based on the quality of baptism, the presentation and dramatization, as well as the baptized persons overall experience. 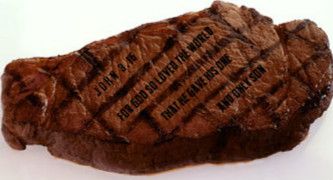 We know how much Bobby Flay loves to grill. If he opened a restaurant, The Gospel Grill, he could serve steaks with scripture verses seared across the meat instead of grill marks.  The water served to guests and used in food preparation could be blessed into Holy water; if anyone was spilled on, it could be seen as a baptism.

An appetizer of breadsticks and wine could double as communion that would be presided over by the server, who would also be an ordained minister. They could also hire a minstrel who would wander around the restaurant and play the harp whilst singing hymns.

Whatever the case, we wish the best to Bobby Flay as he branches out in this new direction. We know Rev. Flay will bring to his ministry the same tenacity and attention to detail as he does in his cooking. It is our hope he can deglaze any walls between the ministry and the culinary arts.