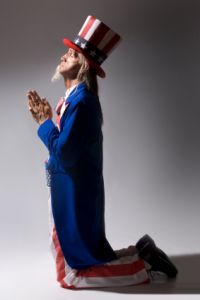 A secular foundation which supports separation of church and state is suing Jan Brewer, governor of the U.S. state of Arizona, for proclaiming a day of prayer on the grounds that it violates the United States Constitution. Perhaps the most disturbing thing about the case is the reasoning used by Brewer's spokesman to defend the proclamation, which shows a fundamental error in logic and a faulty reliance on sentiment.

Brewer, a Republican, declared 6 May a "day of prayer" in 2010 in the hope of inspiring religious faith among Arizonans (much in the same way as the U.S. federal government's National Day of Prayer), however the Freedom from Religion Foundation, an organization of atheists, agnostics, and other secularists based in Madison, Wisconsin, is seeking to overturn the practice and bar Brewer from issuing any further religiously inspired proclamations. The foundation filed its lawsuit Tuesday, 15 March, in U.S. District Court in Phoenix.

In response to the lawsuit, Brewer spokesman Matt Benson has issued a statement defending the governor. Her actions, he explains, are perfectly appropriate since they reflect a long-lasting tradition dating back to America's earliest days. According to the Associated Press, "Benson says [that] [proclaiming a day of prayer is an American tradition dating back to George Washington's presidency]3 and that the governor is confident her actions are within constitutional bounds." In other words, for Benson, proclaiming a day of prayer is good just because it is traditional, therefore it should continue.

This argument is so common in political discourse that we have confronted it more than once here on the ULC Monastery blog. What Benson presents us with is a fallacy known as appeal to tradition, in which the speaker attempts to prove a claim by invoking tradition or precedent. One problem with this approach is that a thing is not necessarily right just because it was a prevalent practice, because a practice which was prevalent may have been based on incorrect assumptions. For example, the belief that the world was flat was traditional for medieval and early Renaissance Europeans, but this does not mean the belief was correct. Another problem with this attitude is that a tradition which worked in the past does not necessarily work in the present, since the present situation may require different standards. For example, traditionally men have paid for dinner because they have earned more than women, but this tradition is less relevant today since women earn more money than they did in the past. In other words, a thing is good not because it is traditional, but because it is fair and makes sense. And even if an appeal to tradition is based on fact, it is still illogical, since a thing is not good just because it is based on something true. For example, even if there was no historical precedent for same-sex marriage, this would not mean that same-sex marriage is wrong it would only mean that it is not traditional. Computers were not traditional when they were invented, but nobody said they were wrong just because they were new.

Let us apply this reasoning to the concept of a day of prayer. As explained above, it is fallacious to claim that something is good just because it is traditional. Obviously, a day of prayer counts as "something". Therefore, it is fallacious for Benson to argue that a day of prayer is good just because it is traditional. Yet he provides no other reason to defend prayer days even if they are nondenominational, they are still biased towards people who adhere to one of the major faith traditions or religions of the world. In fact there is a strong case that prayer days violate the U.S. Constitution. Supporters of prayer days will argue, "the First Amendment applies only to the federal legislature, not state legislatures", but it has been applied to state legislatures since the ratification of the 14th Amendment, which bars states from invoking states' rights in order to get away with treating people as unequal, so it would be difficult for Benson (or Brewer, for that matter) to defend the promotion of religious belief over non-belief, since this suggests inequality between believers and non-believers.

Even if Benson's defense of Brewer makes little actual sense, it still pulls inexorably at the heartstrings of the gullible masses. It is this appeal to emotion that advocacy groups such as the Freedom from Religion Foundation constantly strive to outmanoeuvre. The sad thing is that while most people may believe a thing because it sounds nice, that thing may nevertheless be wrong. If the majority do in fact buy into the kind of rhetoric that people like Benson espouse, the rest of us must ramp up our efforts to nurture critical thinking. It will be the responsibility of us interfaith ministers and wedding officiants to set an example by burrowing deep beneath the pretty words, unearthing the hidden flaws, and exposing the message for the religiously-biased sophistry it really is.